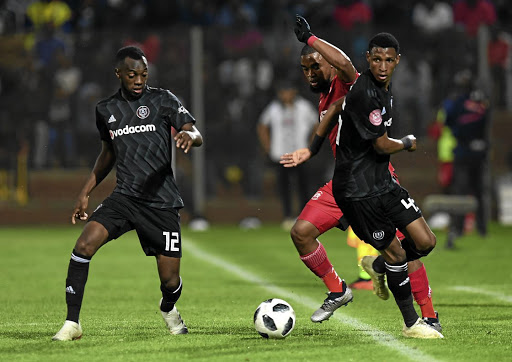 Orlando Pirates are still on track to win the league at the end of the 2018/19 season, despite concerns about the team's defence.

Bucs might have conceded two goals in their 2-2 stalemate against Highlands Park and the same margin in the thrilling 4-2 victory over Chippa United this week but looking at things from afar, the snag seems to be with the defenders, including the goalkeeping department.

Even coach Milutin "Micho" Sredojevic has expressed his concern about their defence.

The Buccaneers have not conceded in only seven of their 26 matches across all competitions so far this season.

And with 25 goals scored in 17 matches, the highest among the top five in the league, it is the leaky defence that has been the biggest letdown - the 16 goals conceded make the best strike force in the league look ordinary.

That said, many of my colleagues have argued that it is still early days to declare Pirates, one of the five early pace-setters, the definite candidate to lift the Premier Soccer League (PSL) trophy come May. My take is that the "skull and bones" of Orlando East look to be the hungriest of all five, for honours.

Among the leaders, Pirates players have been the most vocal about their chances and determination to upset the others for the title.

Forwards Justin Shonga and Augustine Mulenga have never minced their words when asked who they consider favourites for the league crown.

So confident is the duo that they have never held back in their predictions, unlike players from the other four top teams. The fact that Pirates ended second on the log last season, missing the championship by a whisker, has buoyed the Bucs players.

Shonga, Mulenga, Luvuyo Memela and then a host of talent including Thembinkosi Lorch, Thabiso Kutumela, Thabo Qalinge as well as Vincent Pule and Kudakwashe Mahachi, have made for a fearsome frontline, wreaking havoc during the title chase.

Even the Buccaneers die-hards are waiting with bated breath for the end of the campaign to witness Bucs lifting the trophy.

Ndengane thought a transfer to Orlando Pirates would never happen

Orlando Pirates' new centreback Alfred Ndengane has said that he almost gave up on his transfer to the Buccaneers ever happening.
Sport
3 years ago

Hopes of ending the cup drought going back to the 2014 Nedbank Cup looks to be on the horizon.

But as they say, football is a strange game. With Pirates one point away from clinching the title last season, Sundowns came from behind to pull off one of the most dramatic upsets in the PSL in recent years.

Pirates need to focus on game by game, and forget about title-holders Sundowns. Remember the sorrowful 12th-place finish two seasons ago? That didn't go down well with the Pirates top brass, including chairman Irvin Khoza.

At the moment it is Wits who are under pressure that comes with being log leaders, while Pirates have nothing to lose.

Talking about the Students, it must be pressed upon the Wits players that being log leaders doesn't give them the right to show dissent towards referees.

The fracas during their 2-0 defeat by Chiefs, sparked by the sending off of Robyn Johannes, was unwarranted.

The PSL must take action after receiving the match commissioner's report.