Out of depth Solinas cracks up Chiefs 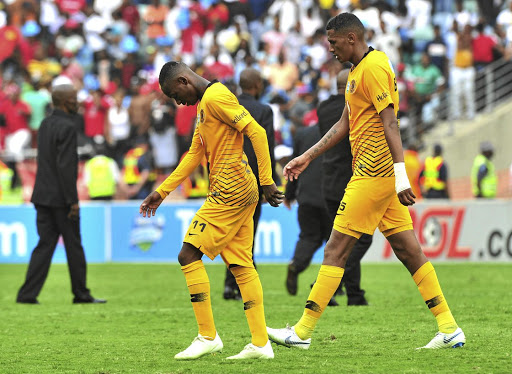 Khama Billiat and Mario Booysen of Kaizer Chiefs walk away in shame after losing the derby to Orlando Pirates.
Image: BackpagePix /Samuel Shivambu

I've always had a soft spot for Kaizer Chiefs and it pains me to see the team being mocked nowadays.

When head coach Giovanni Solinas landed at the Chiefs base in Naturena at the beginning of the season he promised the Amakhosi faithfuls to deliver at least one trophy and league title. So far, the MTN8 and the Telkom KO trophies have eluded him.

However, the Italian tactician is still optimistic, with 14 Premiership matches and an upper-middle log table standing, that he can deliver the league championship trophy next May, provided, of course he survives the axe in the coming weeks, if not days.

As far as the league title goes, Solinas thinks Chiefs can get to second or first on the log before the Christmas break. All they need is to make sure they put away their chances, he opined.

Amakhosi have not had a rosy run so far, in fact, many believe pressure is piling up on Solinas's shoulders.

Most Chiefs supporters are looking for answers, as a number of factors come to the fore, including the lack of experience of Solinas. The man sacked by Free State Stars last year in January has no trophy in his coaching career.

Giovanni Solinas offered an emphatic "No! No" when asked if he would consider quitting as Kaizer Chiefs coach.
Sport
3 years ago

When he was booted out, Stars were staring relegation sitting in 14th place on the log, having won just three of their first 15 matches.

At Chiefs this season, instead of commanding respect, some senior players have actually publicly expressed fault in his tactics, including striker Leonardo Castro who openly embarrassed the coach, questioning his substitution during a media interview, following a 2-2 draw against Bloemfontein Celtic earlier in the season.

Centre-forward Gustavo Paez snubbed the coach's handshake when he was substituted in the Macufe Cup friendly match against the same Celtic.

The role of assistant coach Patrick Mabedi has come under intense scrutiny from supporters privy to the going-ons on the Chiefs bench. The long-serving former captain is seen as being of little or no use to Solinas. Many believe he is harbouring ambitions of becoming the next head coach.

It is crystal clear that Solinas chops and changes his team for every match, leading to low moral and dented team spirit among players.

My beloved Chiefs' 2-1 Soweto derby league loss to Orlando Pirates in October was their fourth game without a win in regulation time.

Also glaring is the unpredictability of the centre-back position. Many matches have been drawn or lost due to the leaky defence and constant changes of partnerships. Solinas has come under fire for fielding Mario Booysen ahead of the more experienced and reliable Daniel Cardoso at centre-back, next to Siyabonga Ngezana.

The coach retained Cardoso and Ngezana from a previous 2-0 win against AmaZulu for a 0-0 draw against Highlands Park, and had Ngezana and Booysen in a 1-0 loss to Polokwane City. He fielded Booysen and Eric Mathoho in the Telkom Knockout penalties victory against Black Leopards, then Booysen and Ngezana against Pirates in the league derby. Confusion.

It's been frustrating and stressful for some players, especially pertaining to games where Chiefs scored first, then conceded, with the opposing team equalising or Chiefs end up losing.

Amakhosi diehards are uncertain whether they will enter the festive season in a jovial mood, that will see them through to the New Year with Solinas still at the helm.