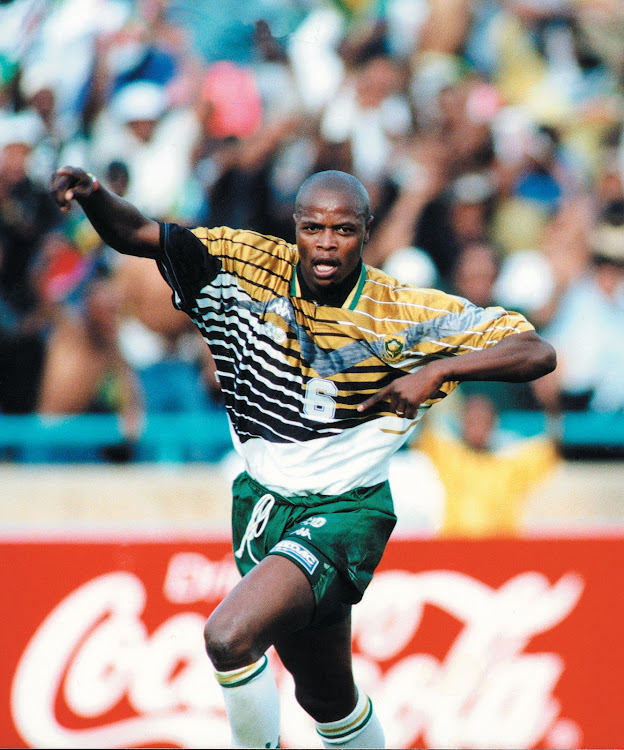 Phil Masinga celebrates scoring South Africa’s only goal in the game against Congo, which booked the country a place in the 1998 Soccer World Cup in France.
Image: Herbert Mabuza. 06/10/97. © SUNDAY TIMES

The 49-year-old Masinga lost a long battle with cancer and died at a Johannesburg hospital on Sunday morning.

Fans‚ coaches‚ former players‚ colleagues and the media took to Twitter to pay tribute to the likeable Masinga after the confirmation of his passing.

"The man whose goal secured South Africa’s qualification to France 1998‚ the country’s first #WorldCup‚" said the the official Twitter account of the FIFA World Cup.

"Our thoughts are with the family and friends of Phil Masinga who has passed away aged 49."

"It is with great sadness that the club has learnt of former striker Phil Masinga’s passing. The thoughts of everyone at #LUFC are with his family and friends‚" the club tweeted.

"We've just been hit by the sad news that Bafana Bafana and Jomo Cosmos FC legend‚ Philemon ‘Chippa’ Masinga has passed on. May his gentle soul rest in Perfect Peace‚" his former club Jomo Cosmos tweeted.

"Sad day for South African football. A loyal servant of the game‚ on and off the field of play‚" SAFA President Dr Danny Jordaan said on the Bafana Bafana twitter account.

"Phil Masinga calibre of players will be missed forever....those players played each game for Bafana Bafana as if it was a World Cup finale ..Rest in Eternal Peace ? #RIPMasinga‚" tweeted Sizwe Mehluli.