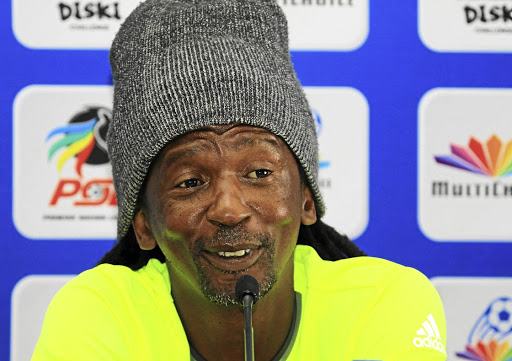 Former Bafana Bafana midfielder Thabo Mngomeni says he has no idea what type of football Bafana are playing at the moment.
Image: Ziyaad Douglas/Gallo Images

Former Bafana Bafana and Orlando Pirates prolific midfielder Thabo Mngomeni has lashed out at the way the national team is playing under coach Stuart Baxter.

On the eve of the all-important, must-win Africa Cup of Nations (Afcon) qualifier against foes Nigeria at FNB Stadium on Saturday, Mngomeni did not spare the English coach from criticism.

"In the matches I've seen with Bafana being coached by Baxter I have been left confused," said the legendary Mngomeni, who won Best Goal of the Year at the Confederation of African Football (CAF) awards in 2001.

It was his unforgettable bicycle-kick goal he scored in Bafana's 2-1 win over Congo in an Afcon qualifier in 2000 that gave him the edge. Those were the days.

The former Pirates skipper, who will be remembered for his dreadlocks, telling passes and spectacular goals, did not mince his words.

"To me it looks like there is lack of planning. We're chopping and changing the team for every game we play. As far as I can envision Baxter doesn't have a starting XI of regulars. The team is directionless.

Help the players via programmes
Sport
3 years ago

"That's the very reason supporters are no longer attending games; they are disgruntled with the way things are going.

"We don't know who will be playing and who will not. I don't have an idea what type of football Bafana are playing at the moment. We don't have a style," Mngomeni said.

"We keep on saying we are on a learning curve. Must we keep on learning from every coach at the helm of Bafana? When will we pass?

"We've been taught different styles by different coaches over the years, it's not funny."

"When Neymar and them express themselves and become creative with the ball, they are praised as football stars. But when our players do the same we are told we are playing without a purpose. No doubt, we have talented players in this country who can equally match or even surpass many other nations.

"They have the capability to take us to the higher level, but there is no planning."

Mngomeni will be remembered for embarrassingly failing to catch galloping Nigerian winger Tijani Babangida in SA's Afcon qualifier in 2000. Bafana lost 2-0, but went on to secure a berth in the final tournament.