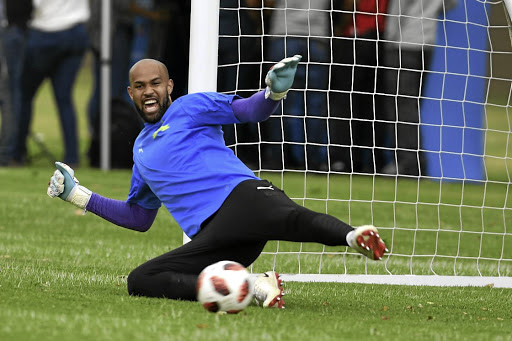 Downs second choice keeper Reyaad Pieterse was unfortunate to concede an own goal which knocked his team out of the cup.
Image: Lefty Shivambu/Gallo

In some countries, especially in the Latin Americas, football can be a matter of life or death.

Remember the sad episode of Colombian defender Andres Escobar whose own goal against the United States helped eliminate his nation from the 1994 World Cup, in the US?

In a spine-chilling moment for Escobar and his family, he was shot dead in his home town. Escobar, 27, was shot 12 times by men who fled the scene at lightening speed. "Thanks for the own goal," said one, according to witnesses.

A sad state of affairs that was condemned all over the world. It was a killing, if at all football related, that should not be condoned, mainly because no player goes out of their way to deliberately score an own goal.

Of late in the PSL, we have witnessed a number of own goals by infield players, which is not rare, especially in the case of defenders putting the ball at the back of their own net in an effort to clear it away.

However, when goalkeepers mishandle the ball, and allow an own goal, it raises eyebrows and suspicions about their goalkeeping ability, concentration and whether they can be trusted to man the last line of defence.

Some have been dubbed to have "slippery hands" or "leaky".

Take the case of Mamelodi Sundowns goalkeeper Reyaad Pieterse who came under fire after he conceded an own goal in the Telkom Knockout quarter-final 2-0 defeat to Baroka last Saturday.

The former Kaizer Chiefs and SuperSport United shot-stopper was blamed for the loss and was seen to be largely at fault for the second goal he deflected into his own net.

His coach Pitso Mosimane came to Pieterse's aid, defending him, asserting that even the best goalkeepers in the world also make such errors.

Another howler of the season came from Orlando Pirates goalminder Wayne Sandilands, a man prone to own goals.

Pirates were held to a 1-1 draw early in the season in August by newly-promoted Highlands Park after a goalkeeping howler by Sandilands stunned the Buccaneers.

It came when, under pressure, midfielder Gladwin Shitholo rolled the ball back to Sandilands, the shot-stopper tried to play it out but completely missed his kick as the ball trickled into the net. It was not a good sight as the keeper scrambled to avoid an own goal, but alas, it happened.

The biggest boob of the match happened when keeper Olivier Kwizera dropped a routine catch but was unlucky as the ball rebounded in off his head after it struck the crossbar from a deflected cross.

A moment of despair and disappointed is always written all over the faces of the keepers as they slump on their knees when they are responsible for an own goal.

For infield players, at least, it becomes easier to atone for their mistakes by scoring as the match progresses. Unfortunately it cannot be said for keepers. They have to live with it for the rest of their careers.

Keepers are helpless as far as atoning for their mistakes goes. It becomes difficult to lift the heavy burden of the own goal off their shoulders.