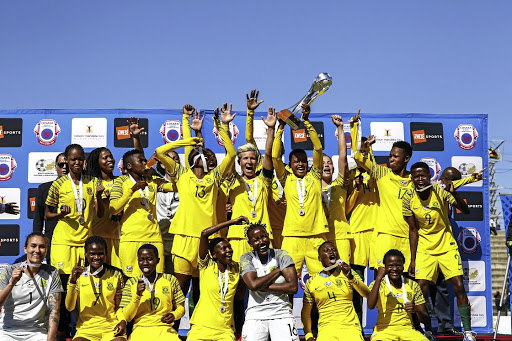 It is not far fetched to believe that in the not too distant future Banyana Banyana can qualify for the Women's World Cup finals and emerge victorious.

Judging by the way the under-resourced local women's football is progressing at national level while the more established and well-resourced men's game is retrogressing remarkably, the dream of Banyana winning the prestigious trophy could be realised sooner than later.

Banyana have never qualified for the World Cup finals, but are making a clean sweep of the Cosafa Cup Women's Championship titles. They retained the Cosafa Cup crown after defeating Cameroon last weekend, claiming their fifth title in the process.

The flourishing Banyana won all their matches leading to an exhilarating final, scoring 13 goals and conceding two. Midfielder Linda Motlhalo finished with the Golden Boot for her four goals in the competition.

Castro's criticism of Solinas's tactics a sign that the coach is out of his depth.
Lifestyle
3 years ago

The Sasol-sponsored team's prolific midfielder, Refiloe Jane, who is on her way to join her new club in Australia, scored the match-winning brace that ensured Banyana lifted the trophy, marking a joyous farewell and send-off for her.

The only time they failed to lift the trophy was when they were beaten by Zimbabwe in 2011.

The women's national team has also qualified for the Africa Cup of Nations finals tournament in Ghana in November-December and will be gunning to qualify for the Women's World Cup in France next year.

When Desiree Ellis was appointed Banyana head coach in February, she was given a mandate to qualify for the Africa Cup of Nations, the World Cup and Olympic Games in Tokyo in 2020.

After taking over the hot seat, she was also required to ensure that the team remains in the top two on the continent as Fifa is about to launch a prestigious tournament that will feature the 16 best women's national teams in the world.

Safa president Danny Jordaan has also come out of the woods publicly complimenting Banyana for making the nation proud.

After all these feats, is it fair to still doubt Banyana's ability to qualify for the women's version of the greatest football spectacle on earth?

To be frank, I have heard many saying they have lost their faith in Bafana, who have on the three occasions they have been to the finals, are still to make it past the group stage.

But some of us still entertain the hope that the senior men's team can make the cut and book a place in the next World Cup in Qatar in 2022.

Do I hear more shouts and protestations that the way things have deteriorated, any dream of Mzansi football lovers visiting and watching football in the oil-rich Middle East country in four years' time is just a pipe dream?

SABC failing dismally on its mandate

Blackout of soccer on radio was uncalled for.
Sport
3 years ago
Next Article