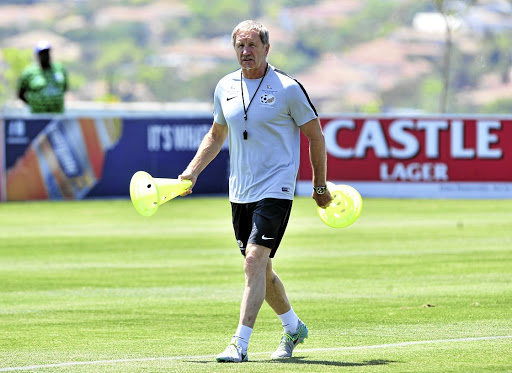 I am one of those Mzansi football patriots not convinced that Bafana Bafana can qualify for and win a major tournament under the stewardship of one Stuart Baxter.

From the time of his first stint with the Bafana team, Baxter proved that he was not cut out for coaching a national team - any national team, anywhere, for that matter.

At club level, yes, where he works with players for the better part of the season, but not for a short stint, a week to be exact, in the case of a national team. Starting from his call-ups to his starting XI, the Englishman has been found wanting.

Following the shocking Afcon qualifier goalless draw against 189th-ranked amateurs Seychelles in Victoria this week, coming on the back of a 6-0 victory at home three days before, Baxter has been exposed as a man lacking in tactical acumen.

Safa had no business in bringing him back.

Remember, this is the same man who failed dismally in his first stint with Bafana, then again in his second coming when we could not beat another minnow, Cape Verde, in two successive matches to qualify for Russia 2018.

Baxter has been accused of favouritism for his reliance on his former players at the clubs he coached before and not looking which other players are available locally and abroad. His relationship with PSL and NFD club coaches is at an all time low.

Safa will be quick to tell us Herve Renard was too expensive, but the two-time Afcon-winning Frenchman was available and willing to come to Mzansi. It is evident, too, that players have lost respect for Baxter, judging by their performance for him and ultimately the country. The coach has not endeared himself to the past and current crop of players.

Gavin Hunt believes Bafana Bafana need to qualify for major tournaments‚ believes they will reach next year’s Africa Cup of Nations‚ and believes the ...
Sport
3 years ago

They don't take him seriously and don't respect him.

He must be shown the door after the home game against Nigeria on November 17, even if he wins it. We cannot afford to have this man on the bench even if we qualify for Cameroon 2019. His record speaks for itself: three victories, a draw and four defeats in eight World Cup and Afcon qualifiers is not good enough.

With more than a year at the helm, Baxter has not mastered who to call up as regular members of the squad.

To make matters worse, while employed by Safa he was engaged in negotiations with his former clubs SuperSport United and Kaizer Chiefs to dump Bafana for a second term with either club. What was the coach thinking making just one substitution when the scoreboard was reflecting 0-0 against the Seychelles.

He brought on the versatile Aubrey Modiba, who at least had two clear-cut chances.

Dino Ndlovu should not have been called up because, despite a goal in the first game, he failed to stamp his authority as a reliable attacking midfielder. Phakamani Mahlambi should have taken his place.

We need a man with fresh ideas and vision after next month's match against the Super Eagles, who are watching with keen interest.

We need to bring back respectability to the national team, and that starts with a coach who commands respect.

PS: The SABC must just use some of the R3bn government bailout to purchase the Safa national teams TV rights. It's taxpayers' money after all.