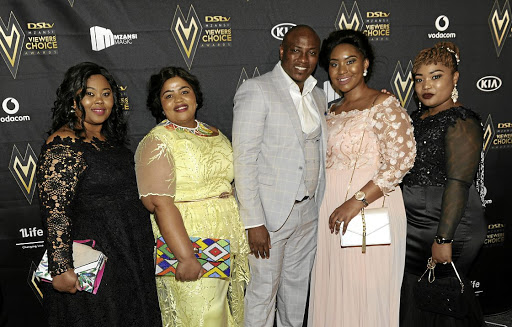 Celebrity polygamist Musa Mseleku says he does not use any imbiza (herbal booster) to prop up his sexual performance, but relies on prayer to keep the fire burning in the bedroom.

Mseleku, 44, who has been propelled to the top of the popularity charts by his reality TV show Uthando Nes'thembu on Mzansi Magic, told Sunday World that divine intervention was the reason for his successful polygamist marriages.

Speaking during a lengthy interview in Joburg this week, Mseleku said he gets the strength to satisfy his four wives from a higher power.

Wearing a blue sports jacket and jeans, Mseleku, who is looking for a candidate to become his fifth wife, said he uses prayer as a weapon to give his wives sexual pleasure.

"God gives me strength as I go to bed. I believe when God created me he had all these plans in mind, so the strength to sexually satisfy my wives comes from Him," he said.

He is currently married to MaCele who is also known as Mamkhulu, MaYeni, MaKhumalo and MaNgwabe, with whom he has 10 children.

The businessman said he doesn't need to use any charm on his wives to respect him or stop them from cheating on him, noting that they were free to engage with him and to voice their views on any matter in their marriage.

"They are allowed to differ with me on matters that they don't agree with and I never get offended and start to feel like I'm losing control. There is nothing I am using to make them submissive or narrow-minded. So there is no charm. In fact I wish I had one, I would be having wife number five by now," he said laughing.

Mseleku gets offers from over 50 suitors
Lifestyle
3 years ago

Mseleku said he was not really obsessed about the age of wife number five, but he was looking for someone matured and respectable.

He said he only uses prayer to keep his household together, which explains why none of his wives have cheated on him.

I have always viewed heterosexual marriage in general as a union that only favours men and oppresses women.
Opinion
3 years ago

"I pray because cheating is not because you are more than one in a man. Cheating is something that happens in a relationship. I guess we have no control over it except making sure we do our best on our side by giving them money, satisfy them sexually and give them quality time.

"If you are doing those things you are then saying, should I find you cheating you then have to have a good reason, if there is ever a good reason for a person to cheat.

"I only pray that my ancestors and God will prevent them from cheating on me."

He also works hard everyday to ensure that the financial needs of his wives and children were taken care of.

"If it is love they need, I always make sure that I see them everyday. I always say to my wives I don't want to be an absent husband or father to my kids," said Mseleku.

He added that he ensured he gave equal time to his wives by making sure that he lays a head at each wife's house after every three days.

But he said he makes sure he sees all of them every day if he was not away on business, adding that he was pursuing wife number five to fulfill his dream of having 20 children.

"I feel like I'm under-performing in that area of producing children. So far, it's four wives and 10 kids. It should be four wives and 20 kids. So wife number five will help me grow my legacy."