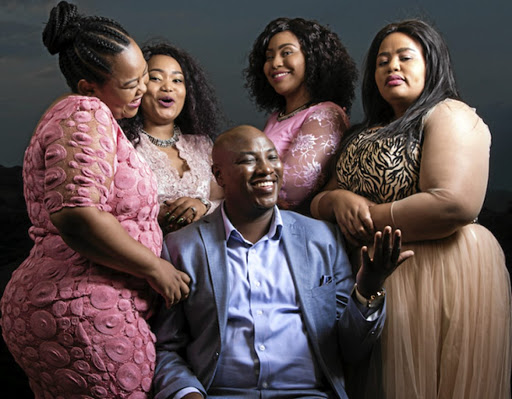 Polygamist Musa Mseleku and his four wives is highly sought by ladies after revealing he is looking to take wife no 5. /Supplied

The large number of SA women offering themselves to polygamist Musa Mseleku on social media sparked an idea which will now see 10 women going on a controversial date with him as they compete to be his fifth wife.

This is according to event organiser Sihle Seleke, who is putting together reality TV star Mseleku's date, which requires the 10 women to pay R5,000 each to participate.

The Bachelor-style group date titled "In Pursuit of Number 5" will take place at an undisclosed venue on July 19.

Although Mseleku confirmed to Sowetan that he will partake in the date, he referred all enquiries to Seleke who spoke of Mseleku as Mzansi's Hugh Hefner.

Seleke is his social media manager and she came up with the idea after seeing the number of women that slide into Mseleku's DMs [direct messages].

"On a daily basis [they] offer certain services and want a lot from him based on what's been put out there," Seleke said.

'MaYeni and MaNgwabe are still happy ekhaya, so are my other wives,' said Musa Mseleku
Entertainment
2 years ago

"So we presented an idea that instead of having all these women sending a request, why don't we have a dinner and invite them to come to officially know him.

"In pursuit doesn't mean he will find [a wife] on that night, he is still seeking. So that's what the event is about.

"We are saying here is your Hugh Hefner, you are not going to see him for free.

"Musa Mseleku has become the Hugh Hefner of Mzansi."

The eight-hour date will run from 4.30pm until midnight on the day. Seleke said the money paid by the women will go towards the event. "The venue is exclusive and obviously we need to pay for certain things at the venue," she said.

Seleke dismissed any claims that this was a PR stunt. However, she confirmed that a camera crew will be filming and the date was a build-up to a possible dating show reminiscent of The Bachelor featuring Mseleku.

"He's genuinely looking for love. Having met his wives and been in conversation with them, you understand that he has 10 children and he wants 20 children. He wants a wife number five and might end up adding it to seven if he gets it [love]."

Seleke posted the invite on social media on Monday at 8.30pm and by Tuesday morning at 10am it was fully booked.

She said they received overwhelming responses from women as far as Zambia.

Musa shared that all his wives could sing and that Mzansi should look forward to more music from them.
Lifestyle
3 years ago

On social media, however, many users have been slamming it as exploitative.

"Musa Mseleku is now a con. He's no different from Bushiri, Mbhoro and all those forex traders," @MdladlaSiya tweeted.

Responding to the social media outcry, Seleke said: "I responded to people on social media [who were] saying this is exploitation and I said 'each for its own'.

"If you think R5,000 is too much for you it means you are not at that level - move on. We are not promising people anything here, we are just saying come for dinner.

"There is no exploitation. These are women that through thick and thin they want to be in this man's space."

Mzansi Magic could not confirm if the date will air on Mseleku's reality TV show Uthando Nesthembu. "[We] support all our talent and their personal endeavours. Musa Mseleku is a businessman and thus not all his business activities will form part of the show. at this stage we cannot confirm if production will be capturing the event," said Philly Kubheka, head of PR and publicity at local entertainment channels.