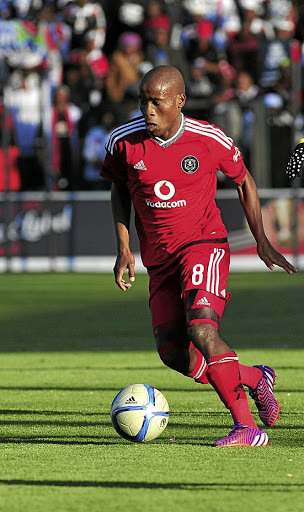 Former Pirates defender Thabo Matlaba had his car stolen while at the gym in Edenvale.
Image: Veli Nhlapo

Former Bafana Bafana and Orlando Pirates defender Thabo Matlaba was made to search for his car keys in his pockets after thugs made off with his ride a week before he was released by the club.

The PSL player, who was released by Pirates after he refused to take a pay cut, opened a case of theft at Norkem Park police station in Ekurhuleni stating that his silver Hyundai ix35, worth R690,000, had disappeared from where he had parked it.

According to a police statement deposed at the station, Matlaba, 31, said he had parked his car at Kwartel Spar in Norkem Park before jogging to Greenstone in Edenvale for a gym session.

He told the police that despite having locked all the windows and doors of the car, he was informed by his tracking company that his car's power was down.

"While in the gym at Virgin Active he received an SMS from Matrix Tracker informing him that his car power is down, and that if he needed any assistance he must call them," reads the statement.

The statement shows that Matlaba, who is now on the books of Black Leopards, immediately checked his tracking app, which confirmed his worst fears.

The app also showed that his car was being driven in a direction he didn't know.

According to the statement, Matlaba went to where he had parked the car, only to confirm that it had indeed been stolen.

"He found his car not there," reads the statement.

Police spokesperson Kay Makhubele confirmed that Matlaba's wheels were stolen, noting that no arrests had been made yet. "Yes, a case of theft of a motor vehicle was opened by Matlaba. The vehicle was later recovered but no-one was arrested," said Makhubele.

Bizarrely, Matlaba vehemently denied that his ride was stolen.

However, he confirmed that he owned a Hyundai ix35, which he said he gave to his father who lived in Limpopo.

"I never reported my car stolen. I drive a Golf 7 GTi and I also own a Hyundai ix35. The Hyundai is used by my father in Limpopo," he said.

According to an online search, Matlaba bought the car at a Midrand car dealership in 2014.

The dealership posted the picture of Matlaba and his family at their branch boasting that everyone at their branch, including people working in the security division and car wash sections, was keen to pose for pictures with the former Bucs defender and said he was the first celebrity to visit the branch in a while.

"We recently handed over keys to Thabo Matlaba from Orlando Pirates for his beautiful new ix35 at Group 1 Hyundai Midrand. We think the ix35 is an excellent choice for a celebrity soccer player, as it is synonymous with power and prestige," said the dealership on its website.