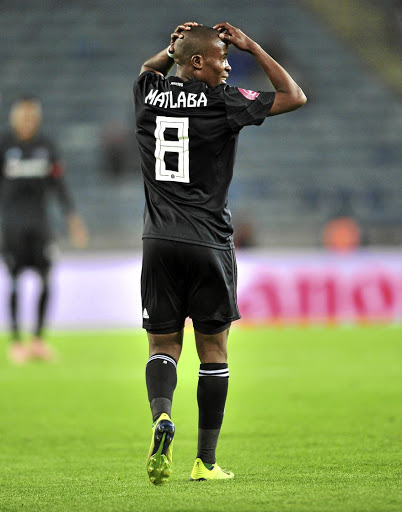 Thabo Matlaba of Orlando Pirates has been living life in the fast lane getting himself into sticky situations.
Image: Samuel Shivambu / BackpagePix

While his teammates and friends were snoring during the Bafana Bafana camp in the wee hours of Friday last week, Orlando Pirates defender Thabo "Festival" Matlaba was allegedly busy beating up women and threatening them with a gun.

Matlaba, 30, escaped arrest after his ex-girlfriend withdrew charges of common assault she had pressed against him. He was accused of spoiling Charleen Magagula's festive mood at an event in a swanky Sandton nightclub on Friday morning last week.

Magagula told Douglasdale police that Matlaba assaulted her and her friend around 4am when she refused to go to his home with him after a night of boogieing at the upmarket Olympus Club in Fourways.

Matlaba could not be reached for comment at the time of going to print. Both his cellphones were off and he did not respond to WhatsApp and SMS messages.

Police spokesperson Mavela Masondo said: "A case of common assault was opened by the complainant who later decided to withdraw it."

The father of Orlando Pirates captain Thabo Matlaba appeared in court yesterday in connection with the murder of a man he allegedly stabbed in a ...
News
2 years ago

Speaking to Sunday World earlier this week, Magagula confirmed that she had pressed charges of common assault against the former Bafana Bafana defender. "My friend and I were hosting an event at Olympus Club last week Thursday. Matlaba called me in the evening saying he was bored and would like us to go out. I told him that I was working and he asked to join us," Magagula said.

"Later on, he started behaving [badly] and saying things that were out of character. He kept on saying how much he loved me and that he wanted me to sleep with him at his home. I refused because we stopped dating in 2015."

Magagula said though they stopped dating three years ago, she remained friends with the soccer star. "Then after I turned down his invitation to sleep at his home, he became aggressive and started insulting me. I tried to calm him down and then he slapped me hard on my cheeks. He hit me several times.

"When my friend tried to stop him, he also beat her up and broke her cellphone. Other patrons came and tried to reason with him but he would have none of that. Instead he went to his car and came back with a gun and pointed it at my forehead," she said.

She claims Matlaba told the crowd that had gathered around the scene that he was untouchable and his father was a former police officer.

"When people tried to talk sense into his head, he was being very sarcastic and made snide remarks. He said he didn't care about his career nor his children."I have never seen him behave like that before."

The woman, who also hails from Matlaba's hometown of Tembisa in Ekurhuleni, said she had to foot the bill for her friend's medical care. However, Magagula could not be reached later in the week to explain why she had decided to drop the charges.

Matlaba's cases include arson.
News
2 years ago
Next Article