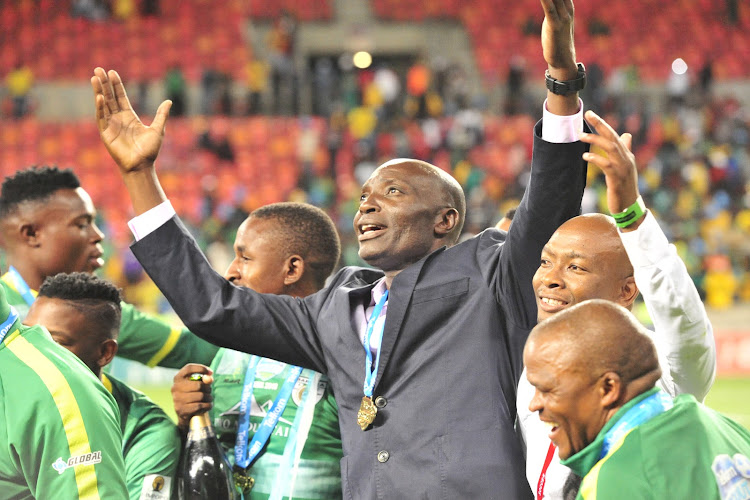 Baroka FC almost woke to the news that their Telkom Knockout trophy was stolen after thugs burgled their office in Ga-Mphahlele, Limpopo, this week.

Instead, the thugs made off with gym equipment and TV sets during the Tuesday night break-in as the prized trophy was in another section of the building. The incident has now left both the players of Baroka and staff members, including chairman Khurishi Mphahlele's family, shattered and fearing for their lives.

It is understood that one of Mphahlele's wives who was robbed at the same premises last year was left shaken by the crime as it revived the trauma she suffered when she was held at gunpoint in September.

Sunday World reported how Selogadi Mphahlele was robbed of R16,000, her wedding band, cellphones and other valuables.

It was said at the time that she was targeted by the thugs who had followed her from the bank.

Police spokesperson Moatshe Ngoepe confirmed that the police in Lebowakgomo were investigating a case of housebreaking and theft.

"Unknown suspects have burgled the Baroka Football Club offices and stole various items such as plasma TVs, a laptop, teapot and the music system," Ngoepe said.

"The suspects are still unknown and no one has been arrested yet."

Mphahlele, whose side survived relegation by a whisker, initially denied that the incident happened.

"I'm currently at our Gauteng offices and I have no knowledge of what you are talking about. Your sources lied to you," Mphahlele said.

However, the club's media officer Mohau Maredi confirmed that there was a break-in, stating that the club was now worried about the incident as it was the second within a year.

Baroka FC have continued their recent spree of foreign imports with the signing of Mozambican international midfielder Manuel Kambala.
Sport
2 years ago

"A case has been opened with the police and it's under investigation," said Maredi, adding that the incident left the staff and players shaken.

He said the club was looking at ways to beef up security.

"We are thinking of beefing up security because it's obvious that we are not safe anymore. At the time of the break-in, there was only one security guard who normally guards the building and it appears that they [the thugs] waited for him to go to the shop before they went in.

"We are also looking at ways to ensure that our staff members, players and everyone feel safe."

He confirmed that the thugs made off with valuables but said they could not make it into the upper floor where the Telkom Knockout cup was kept. The media officer said they were not sure if the crime was engineered by the same suspects who robbed Mphahlele's wife.

"Remember that the people who robbed her came to the offices and pretended to be visitors. They waited until she was leaving the office and robbed her at gunpoint. We hope the police investigations will help identify them."