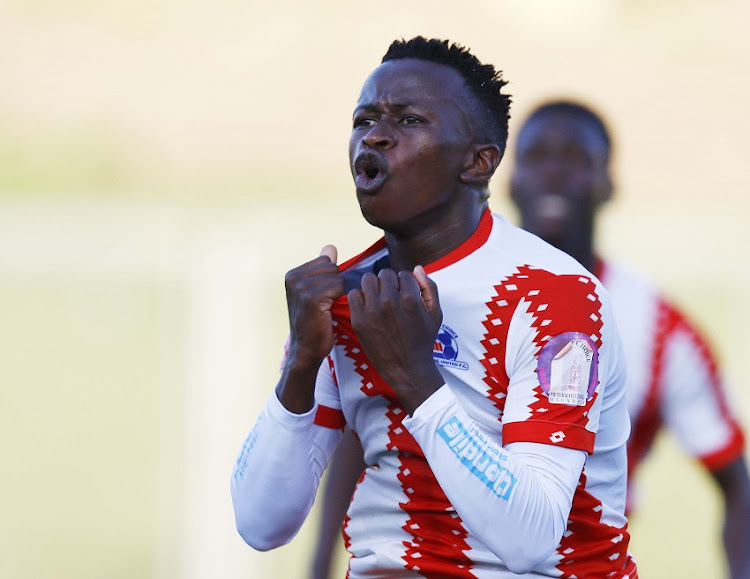 Siphesihle Ndlovu of Maritzburg United celebrates his goal during the NFD Promotion/Relegation Play-off match between Royal Eagles and Maritzburg United at Chatsworth Stadium on May 29, 2019 in Durban, South Africa.
Image: Anesh Debiky/Gallo Images

Maritzburg United retained their premiership status after a 2-0 win over KwaZulu-Natal neighbours Royal Eagles gave an unassailable lead in the relegation-promotion play-offs at the Chatsworth Stadium in Durban on Wednesday afternoon.

The Team of Choice's star midfielder Siphesihle Ndlovu scored the opening goal for Eric Tinkler’s men in the 42nd minute after finishing off a team move with a low shot.

Striker Thabiso Kutumela wrapped up the proceedings with a delightful freekick 17 minutes from time.

Maritzburg only needed a draw to retain their premiership after winning all their previous play-off matches at home to Eagles (1-0) and away to Tshakhuma Tsha Madzivhandila (TTM) (0-2).

Both Eagles and TTM had a slight chance of overtaking The Team of Choice but Tinkler's charges ensured that they remained in control of their own destiny by winning the match.

The PSL may as well call off that match as it will now be an academic exercise with Maritzburg having maintained their position in the PSL.

Eagles only had one win in the play-offs‚ coming off against TTM in the opening home match.

But their 2-1 loss to the Limpopo team at the Thohoyandou Stadium on Saturday dealt a huge blow to their chances of overtaking Maritzburg.

Though Maritzburg have now survived relegation‚ Tinkler will be the first one to admit that the club will have to do some sound recruitment in their short off-season if they are to have a better season than the one they just had.

The Team of Choice had a terrible start under former coach Fadlu Davids before Tinkler came on board towards the end of January to replace Muhsin Ertugral‚ who only lasted for a month after losing all four league matches he was in charge of.

Tinkler’s team only confirmed their place in the play-offs on the last day of the season when they drew 1-1 with Baroka FC‚ while Free State Stars were relegated after a 1-0 defeat against league champions Mamelodi Sundowns.

Maritzburg may well have to find a replacement for dynamic midfielder Ndlovu who started the season having already been linked with Sundowns‚ the same club that poached his former teammate Lebohang Maboe.

There is also talk of Maritzburg losing their dependable goalkeeper Richard Ofori and industrious midfielder Fortune Makaringe to Orlando Pirates.

The duo have been key to the Pietermaritzburg club over the past two seasons.

Alongside Maboe and Ndlovu‚ Makaringe played a telling role in the Davids’ team that finished fourth on the Absa Premiership log in the 2017-18 season and runners-up to now relegated Free State State in the Nedbank Cup.