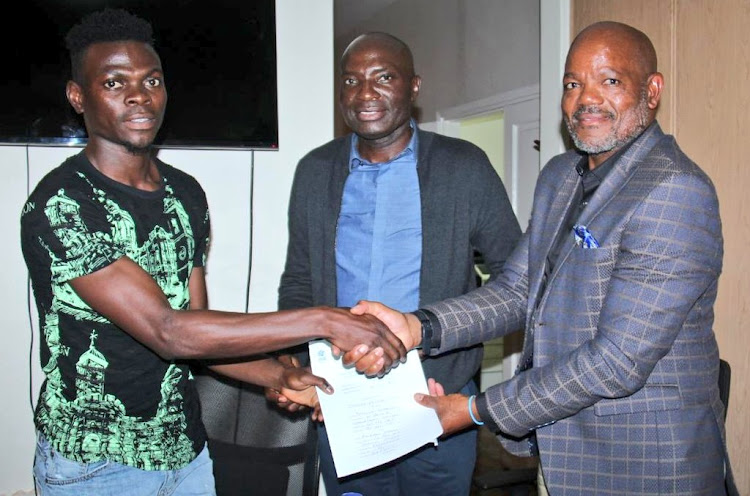 New Baroka FC striker Richard Mbulu says he will complete a dream of his when he features in the Premier Soccer League in the 2019/20 season‚ having held an ambition to join countryman Gabadinho Mhango in South Africa.

The pair were upfront for Malawi in their 3-0 Cosafa Cup win over Seychelles on Sunday‚ and both ended up on the scoresheet as they gave eye-catchign displays.

Mbulu has signed for Baroka from CD Costa do Sol‚ but also previously turned out for Sanjoanense in Portugal‚ the same club where Amajita star Kobamelo Kodisang spent this past season.

“It is good for me to come here and play in the PSL. It is one of the best leagues in Africa‚” Mbulu tells TimesLIVE.

“I know I must work hard to show my talent here in South Africa.

“I started following the league a long time ago and I really like South African football. My ambition since then has been to play in the PSL … it was a dream for me.”

Mbulu made his national team debut in the African Nations Championship finals in Morocco last year and is touted as one of the bright new stars of Malawi football.

The 25-year-old has already followed a long road in the game.

“I played for Mafco [Malawi Armed Forces College] in Malawi and then went to Mozambique. I also played in Portugal. I was there for six months‚ but my team in Mozambique was suffering and they called me back to go and play with them.”

He is still technically a soldier and hopes to do better than his father‚ who gave up the game to pursue his military career.

“My father was a footballer‚ but he did not go far with football because he was in the military.

"After I finished school I joined the military also. I am a soldier too. But I decided I wanted to concentrate on football.”

Mbulu will next be in action when Malawi take on Namibia in a potentially decisive Cosafa Cup Group B clash in Durban on Tuesday.