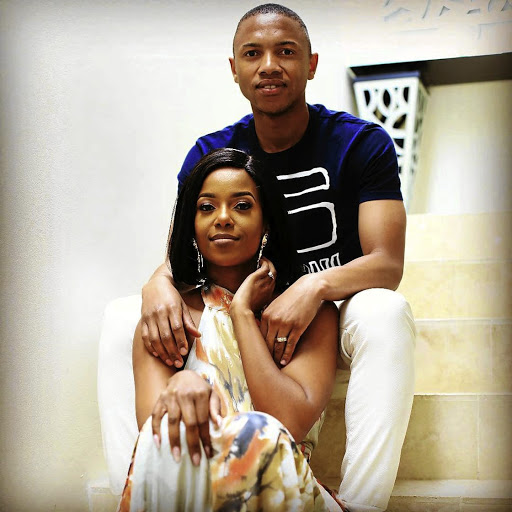 Andile Jali and his wife, Nonhle Ndala. According to sources, Ndala has asked Sundowns' management to rescue Jali.

Mamelodi Sundowns midfield dynamo Andile Jali is facing possible expulsion from the club if he doesn't go to rehab to red card alcohol.

Sunday World can reveal that Jali's football career at the Brazilians is hanging by a thin thread after he allegedly failed three pre-training breathalyser tests at the club's headquarters in Chloorkop since he joined the team this season.

A highly placed source said he was also allegedly involved in a bust up with the club's head coach Pitso Mosimane recently in front of several members of the team's management. This after the coach allegedly reprimanded the footie for drinking his career away.

The source said Jali's wife, Nonhle Ndala, also went to Chloorkop in tears this week and allegedly begged management to rescue the star.But it is said the footie showed the club the middle finger by refusing to attend a meeting called to resolve this issue.

"She broke down and cried in the meeting."Mosimane couldn't be reached for comment at the time of going to press. Jali did not respond to questions sent to him while his agent, Mike Makaab declined to comment.

"I don't want to make a comment about that, you can talk to Mamelodi Sundowns," said Makaab. Sundowns spokesperson Thulani Thuswa said all internal disciplinary issues were dealt with internally between the club and employees.

"When coming to personal issues of players or any Sundowns employee the club never comments on such," Thuswa said.

Two other independent sources within the club who didn't want to be named for fear of victimisation, confirmed Jali's alleged fracas with Mosimane over the coach's concern about his drinking. The source alleges that there was a screaming match between Jali and Mosimane over the issue. He alleged the altercation happened six weeks ago at a meeting in the change rooms at Chloorkop.

"In that meeting, there was Jali, Pitso, acting GM Yogesh Singh and spokesman Thulani Thuswa.  Jali accused Pitso of ill-treating him and told him that he wants out. This happened when Pitso tried to reprimand Andile for coming to training drunk," said the mole. Jali also missed a pre-season trip to Botswana allegedly because of his drinking.

The deep throat alleged Jali's drinking problem is spurred on by a close friend he has been hanging out with since his return to SA from Belgian club, KV Oostende.

Jali's friend confirmed the star has a drinking problem but denied he is the one influencing him.  "He drinks at (nightspots around) Menlyn in Pretoria with friends until very late at night. He drinks beer, but he drinks a lot to an extend that he wakes up still drunk the following day," he said.

The club is said to be eager to help the star to mend his ways.

"The policy at the club is that if a player fails the first test, he is given a verbal warning, second test is a written warning and a third test is termination of contract," the source said. Jali's contract, added the source, unlike those of two other players whose names are known to Sunday World and who failed the three tests, was not terminated because Mosimane believed they wanted to give him a second chance and help him beat the bottle.

"The club is prepared to take him for counselling and rehab," said the source.

Another source said Mosimane was prepared to help Jali because he believed at 28, he still has a lot to offer.

"His peer in the midfield Hlompho Kekana is 33 but is still doing well because he takes care of his body. Coach wants Jali to play at least until he is 35 as he is immensely talented. He likes his arrogance on the pitch and if he clears his personal problems, he will be the best in the country," said the source.