The tongue can be deadly ... I choose to suspend my advice 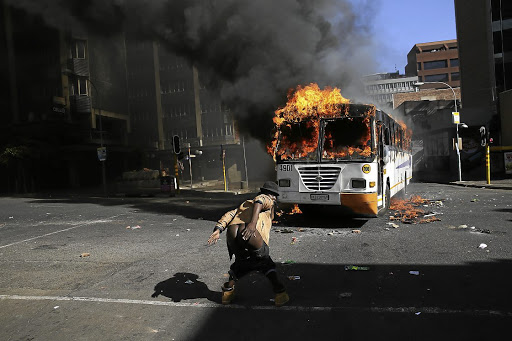 A protester expresses his dissatisfaction during the Fees Must Fall uprising at Wits University. The writer says peaceful protests are often ignored by the authorities and deemed not urgent.
Image: Alon Skuy/The Times

I am sometimes approached for advice on matters that are esoteric or diabolical.

In all instances I try to direct the lost to the right path although at times I would give tongue-in-cheek counsel, especially since my services do not carry a premium.

Thus, it came to pass this week that comrades at an unnamed town in an unnamed province sought my advice on how they could elevate their plight of unemployment and lack of service delivery to the attention of national leaders.

They had approached the local authorities and the gold mine in their area (the main employer) without any success.

The mine, they protested, employed people from other provinces while the local youth wallowed in extreme poverty.

Earlier this year, they even marched peacefully and presented the municipality and the mine with a memorandum of demands, but still nothing had come out of their efforts.

They had approached a radio station and newspapers to highlight their plight but received no coverage.

Since the media is an area I am conversant with, I meticulously brought to their attention how the events were decided for coverage. If you are in an area that is geographically far from the main centres, it's logistically and economically difficult to send personnel to cover your events.

I admire breweries for doing a better job at service delivery

End of World Cup will shock us back to dreary reality.
Lifestyle
3 years ago

I took a long sip from my glass as the comrades lapped up wise counsel from my lips.

There are tens of hundreds of marches and protests taking place in this highly politicised country and it is impossible to attend to each and every one of them.

Mahikeng, I pointed out, had received media attention because a high-profile politician (Supra) was the target and the citizens had gone on a rampage and sowed mayhem by destroying property, which prompted President Cyril Ramaphosa to cut short his high tea with Queen Elizabeth and fly back to South Africa to put out the fires.

The comrades listened attentively as I pointed out that peaceful protests are often ignored by the authorities and deemed not urgent.

That was on the eve of Mandela Day and we parted ways with no stone thrown and they (comrades) promised to review their strategies.

Unfortunately, the following morning as I prepared to do something useful for 67 minutes, I heard that a luxury bus passing through the main arterial road had been attacked by the comrades and the passengers stripped of their valuables such as laptops and cellphones.

Before I woke up, a truck transporting cabbages had also been attacked and relieved of its precious cargo.

The township was in the grip of fear as policemen sought to detain troublemakers. I called one of the comrades who confirmed that, indeed, they had decided to escalate their plight in order to draw the attention of the authorities and the media.

I was gobsmacked when I realised that my advice had led to mayhem and destruction.

Thus, I spent my 67 minutes rescinding my counsel and ensuring that innocent bus passengers and farmers do not suffer on my account.

My advice has been suspended until further notice.

How I was forced to tsipa and do the walk of shame.
Lifestyle
3 years ago
Next Article