What a stink to get municipal employees to do their work 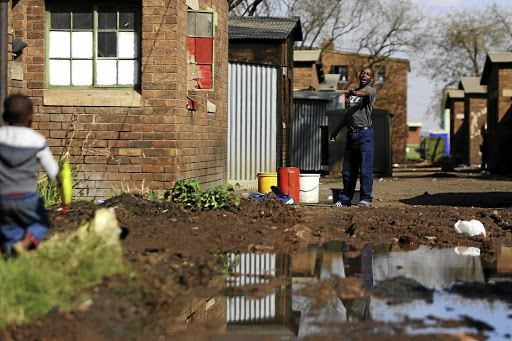 A man warns a toddler to be careful as he walks past a spot flooded at the Actonville hostel in Benoni, Ekurhuleni. The hostel has raw sewage overflowing into the walkways and hasn't seen basic service delivery in weeks.
Image: Alaister Russell

Being a newsman can sometimes be an albatross around one's neck. The profession has many benefits, such as freebies galore, and it can open doors that are closed to ordinary people. However, I prefer to socialise incognito because sometimes people clam up during a conversation upon hearing that you write for a living.

Some of the inane reasons they give is that whatever they say can be used against them in a column. They assume naively that their pointless beer hall discussions will find their way into print. Others openly solicit me to write about them as if they have anything of substance that would warrant an appearance in this hallowed space.

Anyway, there I was visiting my brother and his wife in Bloemfontein. They were hosting family and friends for a party to celebrate their achievements. I arrived in the wee hours after a long drive from Johannesburg. Unfortunately, my nose was assaulted by the strong pong of raw sewerage.

How I was forced to tsipa and do the walk of shame.
Lifestyle
4 years ago

EmJay told me it had been a week since he reported the mess to Mangaung municipality but was only given a reference number after numerous attempts to get the relevant workers to deal with the problem. I found the behaviour totally unacceptable and at sunrise drove to the public works depot to get whoever was responsible to deal with the sewer matter urgently. The security guard at the gate was kind enough to let me know that I was not the only person to visit the depot to complain about lack of service delivery.

Indeed, the officials told me that instead of coming in person to "harass" them, I should call a number. That's when I saw red. I started to rant and rave when I thought about my brother's friends arriving for a party while the brown stuff continued to flow. I started making threats when I saw the municipal vehicles parked and general workers loitering.

Fortified by the holy water I'd had earlier, I pointed fingers and told them there was no way I could drive from Johannesburg to inhale the Bloemfontein sewerage.

I threatened to call the mayor and assured them heads would roll should the mayor be made privy to their inefficiency. I pretended to dial a number when my sister-in-law leaked the titbit that I was a journalist and did not make idle threats.

You should have seen the sudden change in that office. Suddenly a vehicle was dispatched and two sewer specialists accompanied us home. It took them about 10 minutes to diagnose the blockage and stop the flow. EmJay's guests were regaled with the tale of how I got the recalcitrant municipality to do what they are supposed to do. While patting me on the back, they also disrupted my drinking by begging me to resolve their myriad woes with the local municipality.

I kindly declined to be their unofficial trouble-shooter because I was in Mangaung to feast and be merry and not to battle with inefficient bureaucracy but I was saddened by how our so-called government continues to fail the people.

I am also known to binge on crime series on the small screen and I have a decent collection of serial killer documentaries.
Lifestyle
4 years ago
Next Article