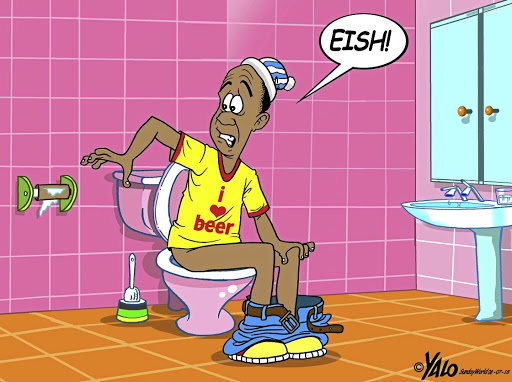 The relief from emptying his bowels soon changed to anguish after the writer discovered there was no toilet paper for him to use.

It's happened to most of us. The bowels are screaming to be emptied and you rush to the loo, strip to your ankles and sit down. You whip out the phone and play Candy Crush when boom, the last moron did not replace the toilet roll.

At home, you'll holler for someone to bring the toilet paper. If there's nobody home, you might tsipa your bum cheeks together and do the walk of shame.

Once upon a time in Rocklands, Mangaung, I faced the prospect of a dry Saturday when my friend Wondy asked me to accompany him to a graduation party.

Not one to miss a drinking opportunity, I tagged along even though I did not know the graduate from a bar of soap. The party was one of those intimate affairs and I soon located the object of my desire across the room and started making eyes at her. I could feel it in my veins and pants that nature had created that Cinderella for me.

She responded encouragingly and we'd occasionally lock eyes and shyly avert them in that knowing fashion. The evening was pregnant with promise as the drinks flowed. Then suddenly, my bowels started rumbling like the Highveld storm when cumulonimbus clouds gather. The toilet was outside and even though I loath to do the number two on foreign territory, this was an emergency.

I sneaked out and walked briskly to the inviting lavatory. I released with such thunder I feared the pot would shatter to pieces. Oh, it felt so good! You should have seen the relief on my face. Eight minutes later I was ready to rejoin the party when oops, there was no toilet paper to finish the business. Not even a newspaper or telephone directory in sight.

For the life of me, I cannot imagine living in a blow job-free country.
Lifestyle
4 years ago

Cellular phones had not yet been invented so I was up the creek without a paddle when I heard female voices outside. I don't know why women do that but they prefer to hold their mass meetings in the loo. There was a knock on the door. I deftly avoided identifying myself by knocking back. Instead of leaving and returning later, they camped right outside. I mulled asking them for toilet paper when I picked out the raspy voice of my Boity among them. I wished the toilet had a back door or the seat ejected like that of a fighter jet.

This was a crisis of crappy proportions and my only option was to brave it and face them. My second conundrum was the absence of air-freshener to ward off the toxic hydrochloric acid clinging stubbornly in the air. I finally pulled up my pants and flushed my dignity down the drain. I evaded Cinderella's eyes as I washed my hands at the nearby tap. The trio walked into the lavatory and were about to close the door when the stench assaulted their prim nostrils.

OMG! Sies! they cried as they evacuated. To this day, I still don't remember whose party it was.

I am also known to binge on crime series on the small screen and I have a decent collection of serial killer documentaries.
Lifestyle
4 years ago
Next Article