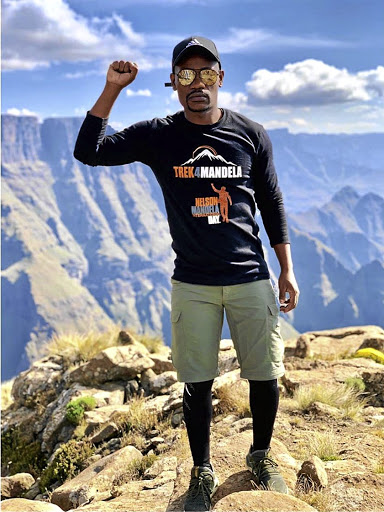 Yesterday, Moasa left the OR Tambo International Airport to kick off his long walk up Africa's highest mountain, Kilimanjaro in Tanzania as part of the first expedition team scheduled to Trek4Mandela on Mandela Day.

Shongwe, who is part of the second expedition team that will Trek4Mandela next month, also among the few personalities, like former public protector Thuli Mandonsela, expected to brave the gruelling climb.

Trek4Mandela was founded in 2012 by mountaineer Sibusiso Vilane and Richard Mabaso, CEO of the Ibumba Foundation, to raise money to buy sanitary pads for poor girls around the country.

Mabaso said the expedition was used to highlight some of the problems that still face African countries, including menstrual health.

"The biggest thing that their [Clement and Pearl's] participation does is to make us and everyone realise that menstrual hygiene is something that affects us. Clement told us about his upbringing and Pearl told us about being a girl.

"Regardless of your status in society, menstrual hygiene is something that affects us all. Through their platforms, they really inspire others," he said.

A Soweto mother’s body was stiff, her hair and eyebrows frozen. But she kept going because she promised her son she would summit Mount Kilimanjaro.
News
2 years ago

Moasa, who had been training for the challenge, took to his social media pages to remind his followers that he was doing the climb for disadvantaged young girls who lack sanitary towels.

Meanwhile, Shongwe still has some time to prepare for her climb and said on Twitter that she had a "million emotions" going through her mind.

"Eleven laps done at the Westcliff stairs today. Feeling so emotional. The first expedition team left this morning and I have a million emotions going through me," she tweeted.

The next expedition team will include Madonsela and 26 others. They are expected to summit on August 9.