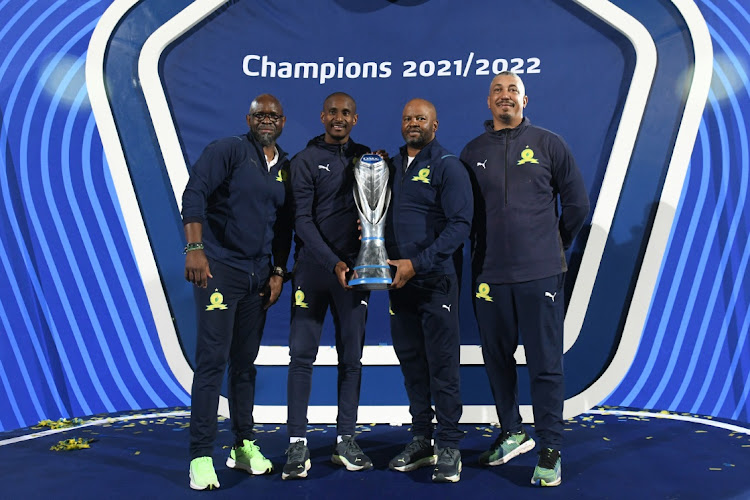 Mamelodi Sundowns co-coach Manqoba Mngqithi expects his players to fully recover in time ahead of their Nedbank Cup final against Marumo Gallants at Royal Bafokeng Sports Palace on Saturday at 6pm.

A flu outbreak on the eve of their final DStv Premiership match of the season against Royal AM on Monday, forced  Sundowns to ring the changes. They secured a hard-fought 3-2 victory at Chatsworth Stadium.

Players like Denis Onyango, Themba Zwane, Lyle Lakay and Andile Jali missed the match, but Mngqithi remains positive that they will be available as they look to complete the treble by adding the MTN8 to their MTN8 and league titles.

“It is going to be a tough match. We have to prepare very well and hope that all the guys who have the flu can come back strong,” Mngqithi explained to the media after the game.

While players who took part in that match did well to see Sundowns end their league camapign with a victory and receive their title in style, Mngqithi still wants all his best players for the final.

He said that they would have to work on their defending after letting in what he described as soft goals this season.

“There are many areas that we still need to improve on. We conceded some silly goals this year and we have to improve on that,” he said.

“We’ve done fairly well in our standards, but we believe Sundowns can do better than that.

“And it is very important to keep something on the neck at the end, that’s what motivates them, so when you begin with the end in your mind, everybody understands that you are fighting for one thing and you are clear in your mind that you are not playing for fun.

“You are playing to win trophies and that culture is growing big now and everybody understands how important it is.”

Golden Arrows will have to wait for the SuperSport United v Orlando Pirates game on May 30 to see if they will finish in the top eight.
Sport
2 months ago

Former Orlando Pirates captain Lucky Lekgwathi is disappointed the current skipper Happy Jele failed to pick up the phone and seek some counsel on ...
Sport
2 months ago

Orlando Pirates kept their chances of qualifying for the Caf Champions League alive with their emphatic 4-1 DStv Premiership victory over Maritzburg ...
Sport
2 months ago
Next Article