'What a time to score my maiden goal'

Galaxy defender Msimango reflects on goal that saved his club 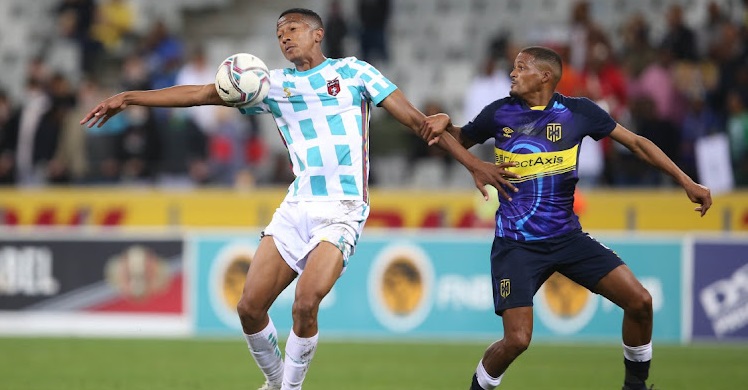 Given Msimango and Craig Martin during the DStv Premiership match between Cape Town City FC and TS Galaxy at Cape Town Stadium on May 07, 2022 in Cape Town.
Image: Bertram Malgas

TS Galaxy defender Given Msimango has reflected on netting a goal that would have proved enough for them to avoid play-offs even if Swallows had won against Kaizer Chiefs in a synchronised tie on Saturday.

Msimango scored his maiden goal for the club in stoppage time to give Galaxy a 1-0 victory over Chippa United in their last league game of the season on Saturday. The goal meant that even if Swallows, who played a 2-all draw at Chiefs, had managed a late winner, Galaxy would have still have saved their Premiership status without heading into the round-robin play-offs.

“What a time for my first goal to come. It was a moment in the game where I felt we were on the back foot. We were getting a lot of set-pieces but weren’t utilising them, so I told myself;  ‘let me just go up, something might happen’, and the ball came to my feet and I had just to finish. It was one of those moments where you positioned yourself very well,” Msimango said.

“It's always a nice feeling to score. It was a massive goal for me... you saw even the celebrations. I even got cautioned for that. I am happy for the team because we saved our jobs, our livelihood, being relegated is not a nice feeling.”

The highly-rated 25-year-old centre-back from Brakpan, East Rand, also disclosed they weren’t keeping tabs on other games that would have had a direct bearing on their fate given they failed to win at the end. He said they were a bit discouraged that they failed to score before halftime .

“We made it a point that we were not going to keep tracking any game because we wanted to focus on our game. We only learnt of other scores at the end of our own game, so during the game we didn't know what was happening in other games,” he said.

“To be honest, at halftime there was frustration, especially because we had been dominant but we were not taking our chances. Missing chances has been the story of our season.”

After the US Soccer Federation announced it will have equal pay for its men's and women's national teams, Safa vice-president Ria Ledwaba believes SA ...
Sport
2 months ago
Next Article