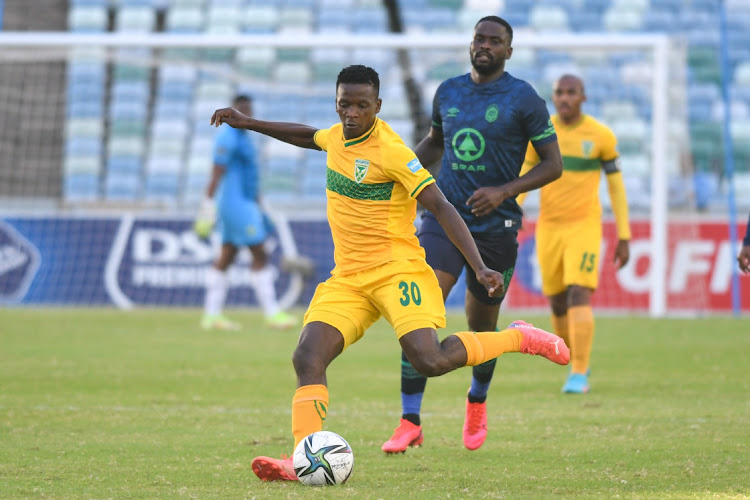 Sbonleo Cele of Lamontville Golden Arrows FC during the DStv Premiership match between AmaZulu FC and Golden Arrows at Moses Mabhida Stadium on May 24, 2022 in Durban.
Image: Darren Stewart

Golden Arrows will have to wait for the SuperSport United v Orlando Pirates game on May 30 to see if they will finish in the top eight.

Arrows moved to eighth on the DStv Premiership log table after their hard-fought 2-1 victory over AmaZulu at Moses Mabhida Stadium in Durban on Tuesday.

A late goal from Nduduzo Sibiya from the spot handed Abafana Bes’thende all three points, which took them to 40.

This means SuperSport will have to get the  maximum points against Pirates in their final match to secure a top-eight place. Matsatsantsa have never finished outside the top eight.

Arrows  had to come back from a goal down to win 2-1 after Sphesihle Maduna had given Usuthu the lead five minutes before halftime.

Arrows equalised two minutes later through Velemseni Ndwamdwe and with the match seemingly heading for a draw, Sibiya netted from a penalty to give his side all three points.

The defeat was the first for AmaZulu under interim coach Brandon Truter since he replaced Benni McCarthy in March and conceded for the first time under him as well.

Arrows interim coach Vusumuzi Vilakazi was pleased with the results and praised his players for the commitment they showed on Tuesday.

“I think the important part is that when we started the game, we started on a high note and we told the players during the team talk that we we needed to start like that, just like in our previous game because we scored two goals early,” Vilakazi told SuperSport TV yesterday.

“So, we got tired late in the first half. We were a bit down but at halftime we spoke about a few things that we needed to rectify and we knew very well that if we up our game we will get another goal and win.

“But we had to double our effort to achieve that.”

Truter was disappointed with the result.

“We made it difficult for ourselves. We needed to be a bit patient with the ball,” Truter said.

“But we gave it away. This is our first loss, not a good way to end the season. We conceded our first goals today as well.”

Former Orlando Pirates captain Lucky Lekgwathi is disappointed the current skipper Happy Jele failed to pick up the phone and seek some counsel on ...
Sport
2 months ago

Orlando Pirates kept their chances of qualifying for the Caf Champions League alive with their emphatic 4-1 DStv Premiership victory over Maritzburg ...
Sport
2 months ago

The Confederation of African Football (Caf) has noted a complaint about alleged irregularities made by SA Football Association (Safa) vice-president ...
Sport
2 months ago

As he prepares for life in the GladAfrica Championship, Baroka chairperson Khurishi Mphahlele has expressed profound disappointment while at the same ...
Sport
2 months ago
Next Article