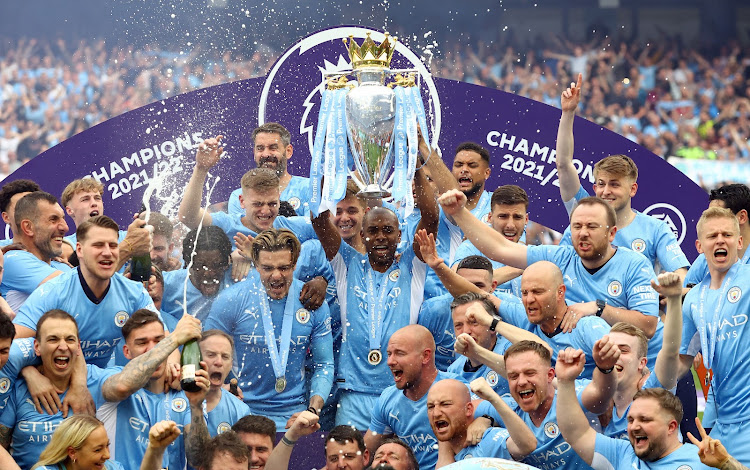 Manchester City manager Pep Guardiola hailed his team as “legends” after they won their fourth Premier League title in five years with a 3-2 comeback win over Aston Villa in Sunday’s final game.

City trailed 2-0 and risked seeing the title slip out of their grasp before Ilkay Gundogan scored, Rodri equalised and then Germany midfielder Gundogan grabbed the winner in an incredible five-minute spell.

“Four Premier Leagues - these guys are legends already; people have to admit it. This group of players are absolutely eternal in this club because what we achieved is so difficult,” said the Spaniard.

City crashed out of the Champions League with a semifinal loss to Real Madrid after conceding three goals within five minutes late in the second leg and Guardiola jokingly said that he had taken tips from the Spanish club.

“I called Real Madrid and they gave me good advice.” he said. “No explanation in Madrid, no explanation today. It’s momentum. Sometimes it’s nice to live these situations. I have the feeling this will help us to be stronger next season,” he said.

“Maybe we need a little more time but every second that passes after this Premier League we realise that four Premier Leagues in five years in this country is probably the best achievement we have done in our careers. It is incredible,” he added.

The former Barcelona coach, who moves ahead of Arsene Wenger and Jose Mourinho, who both had three Premier League title triumphs, showed empathy for Liverpool, who finished second.

“Juergen Klopp said a few days ago about the winners that there are few winners but a lot of triers. I love this concept. I’m a good trier. I’m going to say that Liverpool are losers? What they have done in the Premier League in the last few years when there was a team that was one inch better than them ... but they are winners,” he said.

Not that Guardiola was going to deny he felt worried when his team fell two goals behind.

“Of course, a lot of thoughts, so difficult; always I had the feeling we needed a goal. This is the most difficult game to win - you have to close something that has taken 10 months. Serving to win Wimbledon is the most difficult, say the tennis players, and it was similar today,” he added.

Manchester City won the Premier League title by a point from Liverpool on a thrilling final day on Sunday, prompting comparisons with their dramatic ...
Sport
2 months ago

Liverpool came from a goal down to beat Wolverhampton Wanderers 3-1 yesterday, but it was not enough to earn them their second Premier League title, ...
Sport
2 months ago

Manchester City can match the greatness of Alex Ferguson's Manchester United if they clinch a fourth Premier League title in five seasons with a ...
Sport
2 months ago
Next Article