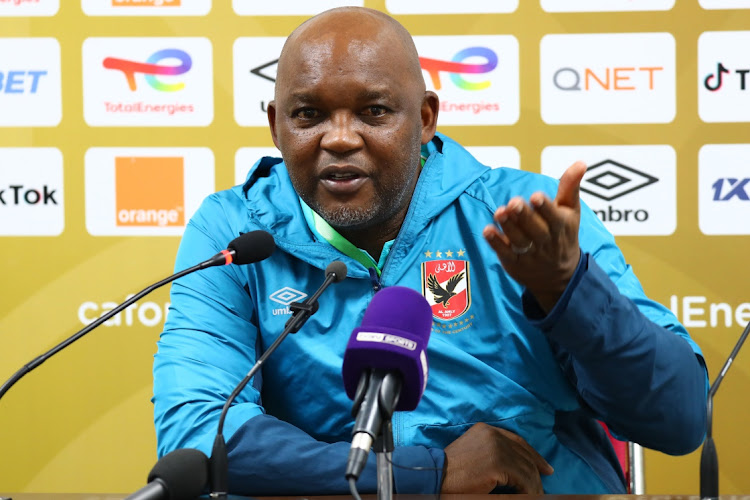 The decision by CAF to award Morocco the hosting rights of the Champions League final on May 30 has left Al Ahly coach Pitso Mosimane shocked.

CAF confirmed on Monday that Morocco will host the final, which is likely to be between Ahly and Wydad Casablanca, after the North African rivals took first-leg leads against ES Setif and Petro Atletico respectively.

It will be the second time in succession that Morocco hosts the final after the Red Devils defeated Kaizer Chiefs 3-0 at Stade Mohammed V Stadium on July 17 last year.

Mosimane admitted that he was surprised by that decision, especially because Wydad could be in the final.

“When the CAF Champions League group stages games were finished, rumours were saying SA is hosting. Hao, jikijiki (suddenly), after the semifinals games were decided, there was a loud silence in the country to host the final. Then after the first leg of the semifinals, suddenly Morocco is hosting,” Mosimane tweeted yesterday.

CAF announced it received bids from Senegal and Morocco, but after the withdrawal of Senegal, Morocco won the bid.

But that didn’t convince Mosimane as he suggested that there is corruption within the African football governing authority.

Ahly had written to CAF president Patrice Motsepe last week suggesting that the final be played in a neutral venue.

It was believed that SA had submitted a bid to host the final, and Safa spokesperson Mninawa Ntloko confirmed that they had those talks but were not successful as they want to also host the women’s championship later this year.

“Because we want to host the Women’s CAF Championship, so we cannot host both,” Ntloko explained to Sowetan yesterday.

“We didn’t take the conversation further. We got more going for that one [women's championship]. Mamelodi Sundowns are there and we are the defending champions so we rather pursue that one because CAF didn’t want us to host both of them.”

CAF also revealed that they are reconsidering the decision and possibly reverting to two-leg finals.

In the first leg  of the semifinal last weekend, Wydad beat Petro 3-1 in Angola while Ahly won 4-0 at home to  Setif from Algeria.

The return matches are scheduled for Casablanca and Algiers this Friday and Saturday.

Bafana Bafana legend Doctor Khumalo is questioning why former captain Lucas Radebe is being denied a chance to lead at Safa.
Sport
1 month ago

Ria Ledwaba and Safa could be headed for a nasty court battle after her lawyer confirmed she has been threatened with expulsion had she addressed ...
Sport
1 month ago

The Premier Soccer League (PSL) is set to be forced to abandon the tradition of having the last two rounds of fixtures played at the same time given ...
Sport
1 month ago
Next Article