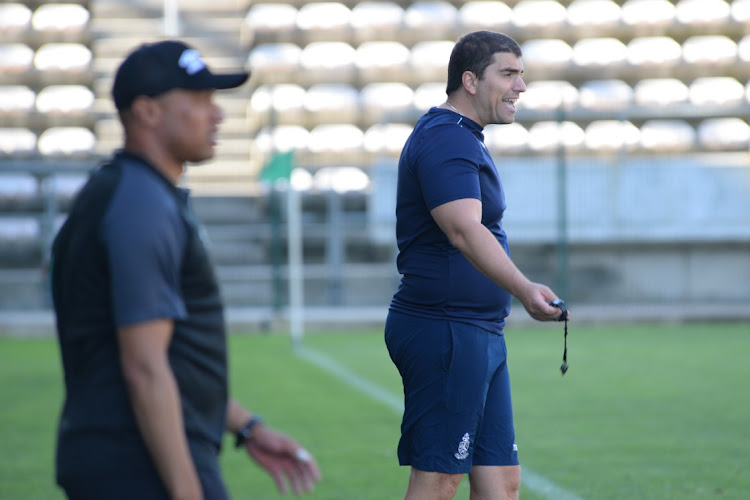 Stellenbosch reserves head coach Evangelos Vellios is happy to have to produced four academy graduates that the club can build around in the future.

Athenkosi Mcaba, Devon Titus, Jayden Adams and Antonio van Wyk made strides in their careers this season when they graduated to the first team, gaining valuable game time and experience in Steve Barker’s team in the DStv Premiership. Between them they have amassed 53 caps. Their ages range from 20 to 21 and there’s plenty of room for growth in their games and the club’s space.

Reflecting on the season, Vellios pointed to the quartet as examples of how they could develop players tactically, technically, mentally and physically, and make sure they have the right attitude or spirit.

“Those four are breaking from our Diski Challenge team. Those boys are so vested, they will play a PSL game and then the next day they will be ball boys for the team,” said Vellios.

“At the end of the day, it’s those that make it, those that have a selfless heart and have full commitment. Those are the ones you want to build the club around. They are fully vested, they are not just looking for the glory of playing on the bigger stage.

“They still want to get the job done. I’m praying they get their reward this weekend, they get a [Diski Challenge winner's] gold medal around their neck. If they close this chapter, they can now focus on breaking through to the next level, which some of them have.

“Athenkosi has played for Bafana Bafana and Jayden is one of the best players in SA, I know that. Antonio is another one I see playing for Bafana Bafana very soon. These are guys that will play a PSL and be a ball for their friends, that’s something that fills me with joy and pride,” he said.

Stellenbosch are racing towards their first Diski Challenge title. They are on top of the log with 61 points, with Thabo September’s SuperSport United in second place with 59 points. The young Stellies team conclude their season when they travel to Brakpan on Saturday to face TS Galaxy at the Tsakane Stadium (10am).

While Vellios’s team need one point to secure the title, he and his charges know that the point won’t be easy to get against the young Rockets.

“I promised the boys if they get anything from 60 to 65 points they could come close to winning the league, which is where we are now – 61 points.

“We can easily lose that game because TS Galaxy is a fantastic team, so we have to focus,” said Vellios.

Two weeks to go until the season ends and it is still not clear who will face an automatic relegation between Baroka, Swallows and TS Galaxy.
Sport
1 week ago

University of Pretoria head coach Tlisane Motaung lamented a stomach bug that infiltrated his side ahead of the 2-2 draw against Cape Town Spurs in ...
Sport
1 week ago

Mamelodi Sundowns coach Manqoba Mngqithi has made it clear they intend to bolster their already star-studded side for next season.
Sport
1 week ago

Kaizer Chiefs caretaker coach Arthur Zwane has entreated the club to go for someone who will not change the style of play he’s introduced since ...
Sport
1 week ago
Next Article