Presidential candidate fails to pitch for presser for fear of 'expulsion' 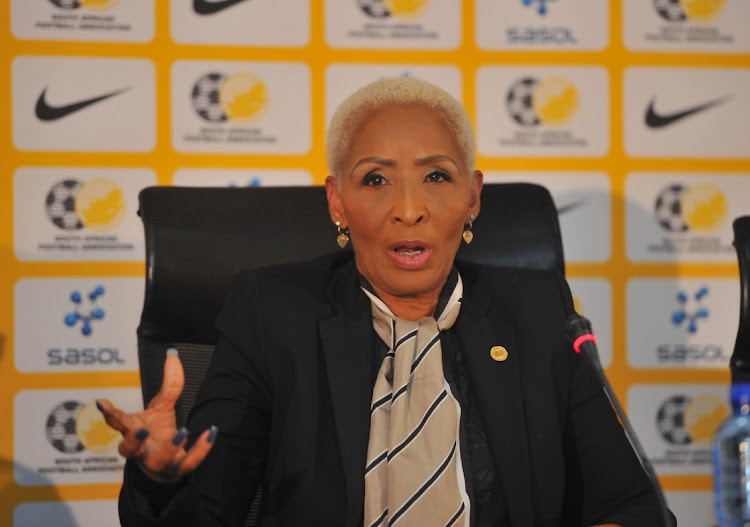 Ria Ledwaba and Safa could be headed for a nasty court battle after her lawyer confirmed she has been threatened with expulsion had she addressed Tuesday's press conference meant to reveal her election manifesto ahead of next month's Safa presidential poll.

Ledwaba and her team had called a press conference to launch her presidential campaign at the Nelson Mandela Foundation in Johannesburg, but on Friday she received a letter from Safa CEO Tebogo Motlanthe warning her of possible expulsion should she continue with the launch.

In the letter, Motlanthe states that people who have been nominated cannot present themselves to the public before the final list of nominees has been approved by the governance committee.

Ledwaba's representative, Leruma Thobejane, explained why she didn’t pitch. “It is true that on Friday afternoon she received a circular. The effect of it was to prohibit Ria from going ahead and addressing this gathering,” Thobejane said on Tuesday.

“I engaged her. We went through the circular and as a lawyer, I pick my fights. I don’t advise my clients if I believe I’m not going to be able to win the case.

“My advice was that let's seek further clarity on the letter issued by Safa. We wrote the letter [to Safa] and we got a response late on Monday afternoon.

“Regarding the way forward, you wait for the right moment to go to court. You don’t go to court when you don’t have a solid case.

“I had to decide on her behalf. Do I go and fight her expulsion in court when other candidates are campaigning or do I allow her the space? I don’t want to waste her time. I want her to focus on her candidacy.”

Meanwhile, former Safa CEO Dennis Mumble was critical of the association, saying amendments to the constitution favour incumbent Danny Jordaan, who is seeking re-election in next month's election.

“The reason I left in 2018 was specific because there were things that I was asked to do in that election which I refused to do,” Mumble explained.

“And Ace Ncobo [2018 presidential candidate] will tell you because you can’t go around threatening everyone and criticising Safa, that's what happened with him.

“Charges were levelled against him, which I refused to put before the disciplinary hearing. There were 31 charges and I was told to go and charge him, for what? Running as presidential candidates? That’s why I’m out for SA football."

The Premier Soccer League (PSL) is set to be forced to abandon the tradition of having the last two rounds of fixtures played at the same time given ...
Sport
1 week ago

Two weeks to go until the season ends and it is still not clear who will face an automatic relegation between Baroka, Swallows and TS Galaxy.
Sport
1 week ago

University of Pretoria head coach Tlisane Motaung lamented a stomach bug that infiltrated his side ahead of the 2-2 draw against Cape Town Spurs in ...
Sport
1 week ago

Mamelodi Sundowns coach Manqoba Mngqithi has made it clear they intend to bolster their already star-studded side for next season.
Sport
1 week ago

Kaizer Chiefs caretaker coach Arthur Zwane has entreated the club to go for someone who will not change the style of play he’s introduced since ...
Sport
1 week ago
Next Article