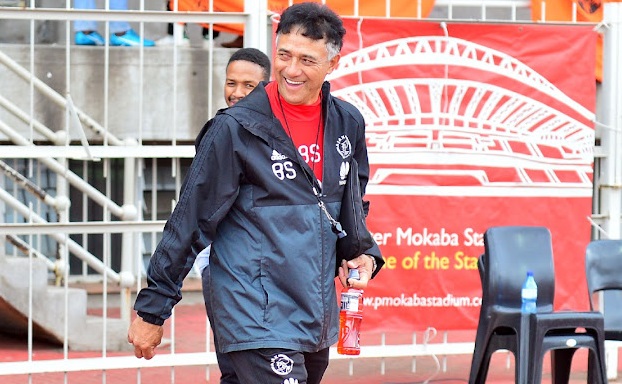 Two weeks to go until the season ends and it is still not clear who will face an automatic relegation between Baroka, Swallows and TS Galaxy.

Baroka appears to be the firm favourites to be relegated to the GladAfrica Championship with two tricky remaining fixtures against SuperSport United and Maritzburg United. Swallows are also in trouble with a match against Chippa United on Saturday and Kaizer Chiefs in their remaining two.

Former coach Boebie Solomons, who was once in this situation before with Santos, Black Leopards and Polokwane City, and managed to save those clubs, refused to predict who will be relegated, saying anything can still happen.

“The way I see it, things can still change mathematically, because Baroka are playing Maritzburg and they are also playing SuperSport,” Solomons told Sowetan yesterday.

“So, there is still a lot that can happen if I look at the points of Maritzburg, Chippa, Galaxy, Swallows and Baroka. It is still very tight. Maritzburg and Chippa got 28 points. Galaxy 26 and Baroka are trying to get into that playoff spot because if they can make it to the playoffs at least they stand a chance.

“Swallows only got 24 points, so they can still go above Galaxy and Swallows. Nothing is lost for Baroka and all those teams above them are still in a tight spot. They are also playing each other. It is very tight.”

Baroka can be relegated this weekend should they fail to win against SuperSport and Swallows beat Chippa in the other match. They need to win their remaining two games and hope for results to favour them in other fixtures.

“You can’t predict, this is not a situation where you look at points. In the last two games how you perform is going to be important,” Solomons said.

“How are you going to motivate your players and keep them focused. The biggest problem is that coaches around this time step up training.

“They give more training and focus on so many things, and sometimes this is the biggest problem for coaches because you put more stress on the players and this is the time when you should put less pressure.

“The coaches should be calming the players down and making them forget the situations that they are in. This is the time you must have fun.”

University of Pretoria head coach Tlisane Motaung lamented a stomach bug that infiltrated his side ahead of the 2-2 draw against Cape Town Spurs in ...
Sport
2 weeks ago

Mamelodi Sundowns coach Manqoba Mngqithi has made it clear they intend to bolster their already star-studded side for next season.
Sport
2 weeks ago

Kaizer Chiefs caretaker coach Arthur Zwane has entreated the club to go for someone who will not change the style of play he’s introduced since ...
Sport
2 weeks ago

Orlando Pirates may seemingly have one foot in the CAF Confederation Cup final following their 2-0 victory against Al Ahly Tripoli in the semifinal ...
Sport
2 weeks ago
Next Article