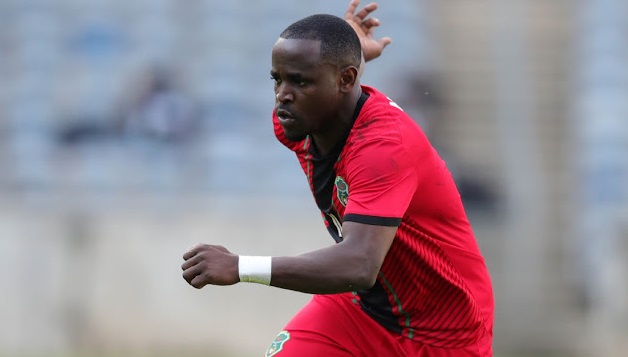 Gabadinho Mhango of Malawi was the hero in Malawi's 2-0 win over Zimbabwe.
Image: Samuel Shivambu

After Gabadinho Mhango’s impressive display for Malawi at the Africa Cup of Nations (Afcon) in Cameroon, former Orlando Pirates striker Andries Sebola feels it was a wise decision by the Buccaneers to keep him at the club even though he hasn't played much for them of late.

Mhango had a good tournament with Malawi finishing with three goals, including a stunner in Tuesday's 1-2 loss to Morocco as the Flames were eliminated after making the round of 16 for the first time in their history.

Prior to travelling to the tournament, the forward was battling for form in the DStv Premiership with Pirates. He had made just six appearances in all competitions at club level, and is yet to find the back of the net this season. Still, Pirates activated an option to extend his contract which could have expired this June, by another year.

Sebola believes Mhango's performance in the Afcon may have given him the confidence to perform better at club level when the programme resumes next weekend.

“It was a wise move by Pirates [to activate an extension on Mhango's contract] although he didn’t have a good season after winning the top goal scorer award in the past [2019/20 season],” Sebola told Sowetan yesterday.

“Even when he went to the Afcon, he said, ‘I want to go there and prove my critics wrong and also regain my form of scoring goals.’

“You could see how he believes in himself and there are so many scouts in the tournament and you will find that one of them or one of the teams could be interested in his services.

“Pirates will now benefit if there is an overseas team that wants him. As I said, it is a nice move for them to activate that option to extend.”

Sebola also hopes the 29-year-old can translate that performance to Pirates.

“The boy is talented and can score from where people are not expecting him to score. You could see he is a fighter and defenders feel him when he is around,” he said.

“I think he will show the same form that he is showing so Pirates can finish in a good position. His work rate and finishing impressed me a lot. He is a fighter and he is not afraid to be tackled by defenders, so that’s good for him.

“If he can come back with the form he showed with Malawi, I don’t see anyone stopping him.”

Mhango's form came at the right time as he could form a deadly partnership with Ghanaian Kwame Peprah, who had showed promise before the Christmas break. Another striker, Zakhele Lepasa, is also returning from a long-term injury.

Poor pitch conditions at the Africa Cup of Nations have seen an unprecedented switch of venues for quarter-final and semi-finals matches, the ...
Sport
5 months ago

Sports minister Nathi Mthethwa remains steadfast that current regulations allowing just 2,000 spectators at stadiums remain in place - but the next ...
Sport
5 months ago

Orlando police have confirmed there will be no further action against Orlando Pirates media officer Thandi Merafe after prosecutors dropped a common ...
Sport
5 months ago

Kaizer Chiefs and PSL set a deadline to agree on arbitrator

Kaizer Chiefs and the Premier Soccer League (PSL) have until Monday to agree on an arbitrator in their case over the club failing to honour two DStv ...
Sport
5 months ago
Next Article