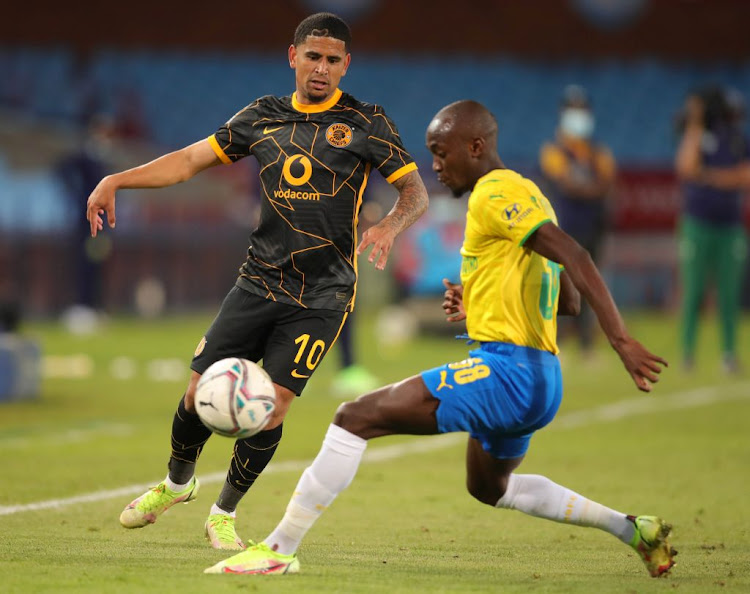 Keegan Dolly of Kaizer Chiefs challenged by Peter Shalulile of Mamelodi Sundowns during the DStv Premiership match between the two sides at Loftus Versfeld Stadium on September 12, 2021 in Pretoria.
Image: Samuel Shivambu/BackpagePix/Gallo Images

Stuart Baxter surveyed the wreckage of Kaizer Chiefs' league defeat to Mamelodi Sundowns at the weekend and admitted the penalty miss by Lebogang Manyama in the second half was a crippling blow that proved very costly after the dust had settled at Loftus on Sunday evening.

Chiefs were trailing 2-0 after goals from Grant Kekana and Peter Shalulile when Rivaldo Coetzee handed the visitors a lifeline as he blatantly handled the ball inside the area in the 79th minute.

But second half substitute Manyama spurned the generous gift from Coetzee and sent his shot crashing into the crossbar with goalkeeper Denis Onyango well beaten. The Soweto club could not find another clear-cut chance in the remaining minutes of the high-profile encounter and Baxter lamented a missed opportunity that could have brought his charges back into the match.

“We got ourselves a penalty and we missed the penalty. That was maybe going to be a barnstorming finish if we had scored it, but it wasn't and we ended up losing the game 2-0. That was by far not a true reflection of the quality of our performance,” he said.

The decision to allow a substitute to take a penalty during such a crucial moment of the game has been criticised by many fans, but Baxter said he has little control over who assumes the responsibility during a match.

“We have four or five penalty takers [in the team] and when they are on the field and they say they do not want to take it [the penalty], then I have got little control over where the responsibility goes,” he explained.

“I think you have got to listen to the players and the one who has the confidence should take it. But I can't, I can't ... If it was me and I was on the field and I was one of the players, I would have pushed Lebo away because that's his first game back from injury. I don't think it's fair to give him that responsibility if it was me on the field, but Lebo is a character.

“Lebo gets on the ball and feels I will score this.”

Chiefs return to league action when they host Royal AM, who won their first match of the season when they beat Chippa United 1-0 earlier on Sunday, at FNB Stadium on Saturday.