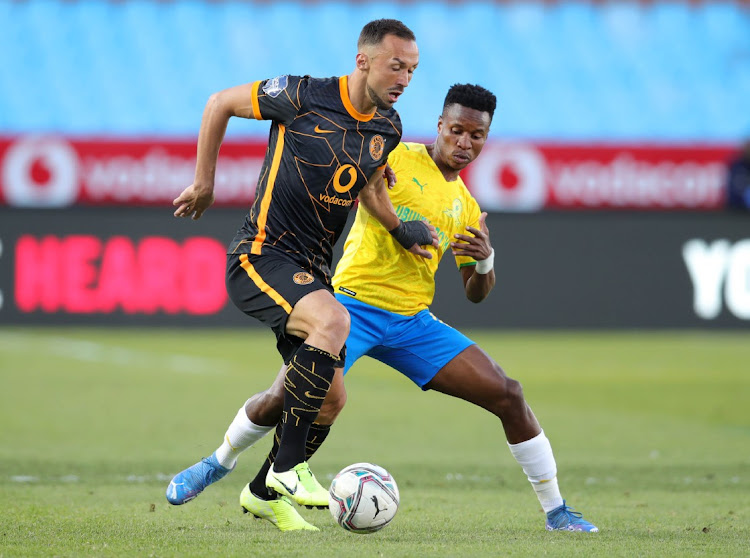 Grant Kekana and Peter Shalulile scored to inspire Sundowns to victory. Substitute Lebogang Manyama missed a penalty that would have given Amakhosi some consolation. Referee Luxolo Badi awarded Chiefs the spot-kick after Rivaldo Coetzee handled the ball inside the box.

With a rare formation of three central defenders in Daniel Cardoso, Eric Mathoho and Austin Dube, the visitors still struggled to clear their lines properly, making a number of schoolboy errors at the back.

Sundowns’ intent to go all out reflected in their line-up as almost all their main attackers in Gaston Sirino, Themba Zwane, Kermit Erasmus and Shalulile started the match.

Despite the lack of creativity and fluidity, Chiefs coach Stuart Baxter saw no need to make changes until Sundowns doubled their lead via Shalulile three minutes post the hour mark.

Chiefs’ defensive fragility was exposed as early as the seventh minute when Kekana outjumped everyone to nod home from a brilliant Lyle Lakay free-kick. Kekana was behind Dube, who looked out of his depth, when he scored, and the Amakhosi centre-back could have easily contained him. One would also argue that goalkeeper Bruce Bvuma must take a fair share of blame for the goal.

While Sundowns were better in ball retention and box entries, Chiefs played in patches in the first half. Keagan Dolly tried to make Chiefs tick but his teammates didn’t do enough to assist him.

Sundowns’ dominance was also boosted by winning the midfield battle, where Andile Jali and Coetzee outshone Cole Alexander and Phathutshedzo Nange. The Chiefs midfield pair wasn’t in its element, failing to break down the Brazilians’ attack and adding  o added no value when Chiefs were attacking.

Newcomers Royal AM finally won their first match in the premiership when they beat Chippa United to hand the Gqberha side their maiden defeat of the ...
Sport
4 months ago

Orlando Pirates have suffered a major blow to their 2021-22 season with star creative forward Thembinkosi Lorch ruled out for the rest of the ...
Sport
4 months ago

Orlando Pirates had to work like a fully loaded dump truck negotiating a steep hill for it, but they finally managed their first win of 2021-22, 1-0 ...
Sport
4 months ago

Stellenbosch FC head coach Steve Barker says the international break has its advantages as his side looks to rebuild squad morale within the camp.
Sport
4 months ago
Next Article