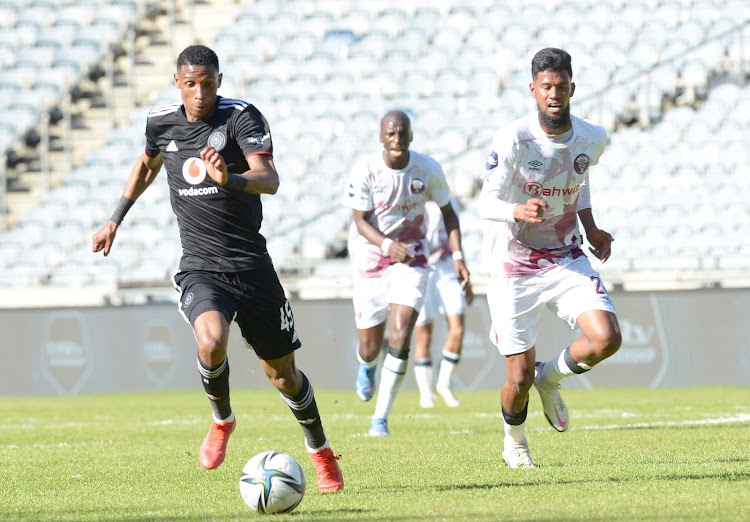 Orlando Pirates had to work like a fully loaded dump truck negotiating a steep hill for it, but they finally managed their first win of 2021-22, 1-0 over tough Swallows FC on Saturday.

It's been a much-disrupted start to 2021-22 for Pirates on the bench and field. Josef Zinnbauer's departure after two games has left his assistants, very much involved but not in charge of the off-season, attempting to stamp their philosophy on a Bucs who have also had players in and out of contention with injuries.

If Zinnbauer's tenure was hit and miss, and his selections at times baffling and inconsistent, Mandla Ncikazi and Fadlu Davids had struggled to have Bucs' drifting ship harnessing the wind with two draws coming into the game against Swallows.

Saturday's performance was far from pleasing on the eye, but Bucs' co-caretaker coaches will be delighted to be off the mark with much-needed first win.

Captain Happy Jele went to a major milestone becoming the first Pirates player to reach 400 games, and the loyal survivor of their double-treble in 2010-11 and 2012-13, and 2013 Caf Champions League final run, was able to savour the landmark with a victory.

Bucs' starting front-line gave hint to the some of the indecision in players' positioning that seems to hinder Pirates finding a consistent winning identity. Deon Hotto's versatility has seen him effectively deployed at left-back, left wing and centre-forward just this season. On Saturday he was on the right wing, and Kabelo Dlamini, who has played in central midfield recently, led the line.

Against a side as rigidly laid-out as Swallows Pirates struggled for much of the 90 minutes to find the forcefulness or ingenuity they needed to threaten goalkeeper Sanele Tshabalala's goal.

Brandon Truter's tough Birds are still seeking the key to unlock some of the exciting attacking football they displayed at the start of 2020-21. But a side who lost two league games in that promoted campaign - albeit drawing 20 times - remain one of the hardest combinations in the league to beat.

Mabasa's introduction in the 59th for Hotto gave Pirates' attack a focal point, and the ex-Bloemfontein Celtic man got the decisive strike.

Pirates had the best of the half-chances in the opening 45 minutes. They were no more than tentative efforts, as Bucs were unable to get behind the solid Birds.

Just past the half-hour Dlamini took a pass from Bucs' lively right-back Bandile Shandu on the corner of the box, turned and curled a strike that was comfortably taken by Tshabalala.

Before the break Abel Mabaso's pass found Vincent Pule who struck a drive off target. At the other end Lebohang Mokoena's volley similarly did not trouble Mpontshane.

Bucs came closer to a clear-cut chance at the start of the second half. A corner fell to its taker, Dlamini, on the right whose header back in, via a touch from Pule and deflection, could not be connected at the far post by Mabaso.

As the final 10 minutes beckoned Pule teased Birds substitute Keletso Makgalwa on the left, then the winger's cross was accurate to find Mabasa to rise above Sipho Sibiya and head past Makgalwa.