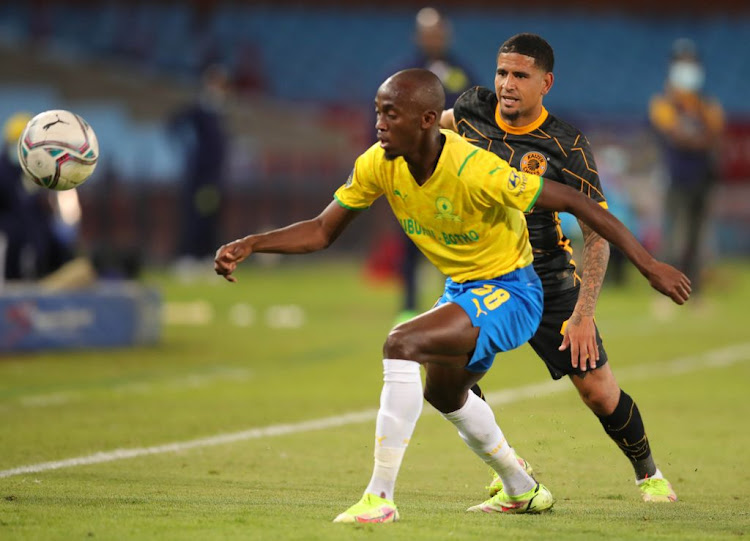 Keegan Dolly of Kaizer Chiefs challenged by Peter Shalulile of Mamelodi Sundowns during the DStv Premiership match between the two sides at Loftus Versfeld Stadium on September 12 2021 in Pretoria.
Image: Samuel Shivambu/BackpagePix/Gallo Images

Peter Shalulile's value to Mamelodi Sundowns continues to rise exponentially and he once again showed why he's become such an important figure to the club when he scored in the 2-0 win against Kaizer Chiefs at Loftus at the weekend.

The Namibian has proven to be a valuable addition to the club since joining from Highlands Park in September last year and appreciative Sundowns co-coach Rulani Mokwena spelt out his immense contribution to the Brazilians.

“Ahh Peter, you run out of superlatives [when trying to explain his worth to the team]...... this guy, I think he is charged by Duracell [batteries]," Mokwena said when asked how the striker's workload will be managed at both club and international level.

“But the reality is Peter is a team player, he sacrifices, pushes and puts himself on the line for the team. And he knows, that is what we say to him,  we say to him 'as long as you are at service to Mamelodi Sundowns, everything else will fall into place.'

“We trust him like we do every single one of our players. We know that not just in relation to goals and assists, there's a lot more to Peter. The movement, he creates space, he pulls out defenders, the high press. Sometimes it is a little complicated and different, but Peter gives us that. As long as he continues to do that.....”

Mokwena said the high work rate that Shalulile usually displays during competitive matches is no surprise as he gives the same commitment and dedication even at training.

The Sundowns coach said they are desperate to protect the Namibian as his services are required by both the club and country.

“Maybe the best thing is to try find the most expensive cotton wool to wrap him in because he just continues to run and run,” he continued. “He's like this even at training. There are times when we work on pressing and Peter just continues to press everybody. We are like ‘Peter, these are the people you must press' and you can see the disappointment on his face.

“But, top lad, top human being and we are just fortunate to have not just Peter, but a very good group of human beings in our team.”