Celtic and Swallows slug out draw in Bloem 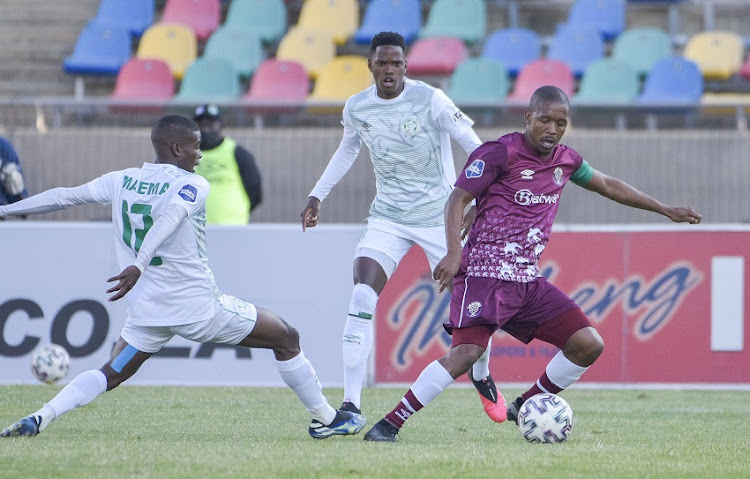 Kgaogelo Sekgota’s 55th-minute opener was cancelled by Neo Maema’s equaliser in the 59th in a second half that was more open and entertaining than the first.

Johan Maduka’s Celtic came into the game in 11th place and battling form, with just a lone win in seven games, all in the league.

Swallows, in an excellent promoted season where they Brandon Truter has steered them to one defeat to be in fifth, had lost their early winning spark. Their 1-0 home victory against Black Leopards on April 11 was just a second victory in 13 league games. They shared the spoils for the ninth time in those 13.

Ndumiso Mabena spooned a drive skywards in a promising build-up to Celtic early on. From there chances in the opening half were rare.

Celtic did not have the movement, penetration or final pass to break Swallows’ low defensive block.

After some encouraging movements early in the half, the Birds withdrew into a shell, apparently content to bide their time for the right counterattacking opportunity or mistake to present itself.

Phunya Sele Sele’s most influential attacker, Mabena, limped off, replaced by Harris Tchilimbou, in the 23rd.

Just before the break Swallows’ waiting game seemed it would pay off as Musa Nyatama split the defence with a perfectly weighted pass for Sekgota’s run on the left.

The winger attempted to lift a lob over advancing goalkeeper Sipho Chaine, but that drifted past the top-left corner.

Gamildien drove at Chaine moments later. In Injury time Celtic centreback Mzwanele Mahashe got on the end of a Menzi Masuku corner at the far post and knocked back in, Tchilimbou’s touch off a shoulder cleared off the line.

Celtic came out applying pressure after the break. But Swallows were gifted the opener 10 minutes in.

From a home throw-in Mahashe passed across goal to Chaine, who, under pressure from Ruzaigh Gamildien and Sekgota, managed only to steer an attempted lob up-field low into the chest and knee of the latter. The ball looped up for Sekgota to half-volley into an exposed goal.

It took just four minutes for Celtic to equalise, and there was a touch of fortune involved in their strike too. Masuku was played down the left and fed Given Mashikinya inside, who got the slight touch-on inside again for centre midfield partner Maema, whose low strike from just inside the box took a wicked deflection off Wandile Letlabika past Virgil Vries.

Maema, having scored his first PSL goal, picked up a ball in the centre, advanced and struck a drive onto the left upright, as Celtic continued to edge the half.