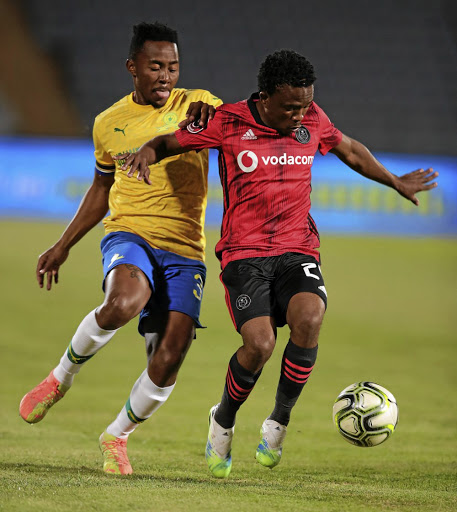 Paseka Mako of Orlando Pirates is challenged by Lebohang Maboe of Mamelodi Sundowns during their league match at Dobsonville Stadium last night.

Lack of goals between Mamelodi Sundowns and Orlando Pirates, in what was the first game to resume the Absa Premiership here last night, saw this hyped tie fail to live up to its top billing.

The goalless stalemate meant Sundowns remain second on the log on 45 points, three behind leaders Kaizer Chiefs from 22 games each. Pirates leapfrogged SuperSport United to the third spot on 41 points after 24 outings.

Just a few minutes before kickoff, the Buccaneers made a shuttering announcement regarding the unavailability of star player Thembinkosi Lorch and striker Justin Shonga for the match, revealing the duo were omitted from the bio-bubble after "breaching the team's protocols".

However, the club statement made it clear Lorch and Shonga would be allowed back into the biologically safe environment (BSE) after an internal disciplinary process. The pair would then undergo two coronavirus tests each before joining the rest of the team.

Having not played in 157 days, due to the national lockdown aimed at curbing the spread of coronavirus, Pirates showed signs of rustiness in the opening exchanges of what was Absa Premiership's first game since mid-March.

Ricardo Goss is set to reclaim his place in the starting line-up when Bidvest Wits meet Kaizer Chiefs in the Absa Premiership match at Orlando ...
Sport
1 year ago

Conversely, Sundowns, who returned to action via beating Bidvest Wits 3-2 in the Nedbank Cup at the weekend, were understandably more effective. The Brazilians were able to put a string of passes together, but impulsiveness was their major undoing, especially Themba Zwane and Keletso Makgalwa upfront.

Despite his two deplorable errors versus Wits on Saturday, Motjeka Madisha retained his spot in the Sundowns XI. The defender hardly put a foot wrong.

Downs' weakest link was Lebohang Maboe, who was oddly deployed at right-back. Vincent Pule and Paseka Mako troubled the Downs man only for them to end up delivering poor crosses.

Downs' dominance culminated in the 38th minute when they had a penalty shout following Hlompho Kekana's brilliant run, mesmerising the Pirates defense, before the ball touched the hand of Happy Jele. However referee Victor Gomez waved play on.

The second-half was a bit yielding for the visitors, thanks to Fortune Makaringe's creativity in the middle of the park and the introduction of Luvuyo Memela for Augustine Mulenga at the break.