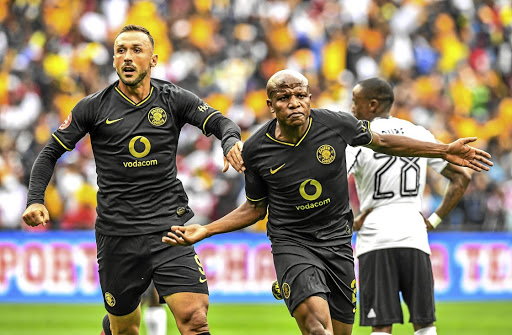 Lebogang Manyama of Kaizer Chiefs celebrating with teammate Samir Nurkovic after scoring against Orlando Pirates at FNB Stadium in February. The goal was named the best for February/March yesterday.
Image: Sydney Seshibedi/Gallo Images

Kaizer Chiefs midfielder Lebogang Manyama has described the goal he scored against Orlando Pirates in February as a memorable one.

It was that strike which got Manyama the Goal of the Month Award from football fans yesterday. The goal earned Chiefs a 1-0 victory in the Soweto derby.

His individual brilliance in the build-up to the goal saw him evade a couple of Pirates players before unleashing a powerful low drive from the edge of the 18-yard area into the net.

"I will like to take this moment to thank all the fans who voted for me for this goal. I think it is fair to say it will remain the memorable one because it was my first derby goal," Manyama said.

"The award just tops that all, so thank you once again. I will also want to thank the coaching staff and the boys because a lot of planning was behind that goal and it came out exactly how we planned it.

"I was the lucky one to get a chance to finish it off and once again, thanks to Amakhosi fans "Amakhosi for life."

Meanwhile, Maritzburg United coach Eric Tinkler and midfielder Daylon Claasen were named the Coach and Player of the Month respectively for February/March.

Prior to the coronavirus-
enforced hiatus, Tinkler guided Maritzburg to four successive wins, beating title contenders Chiefs and Bidvest Wits away from home as well as defeating Stellenbosch FC and Polokwane City, impressive results that moved the Team of Choice to 5th place on the log standings.

Claasen played an integral role in United's good form back in February.

The Absa Premiership finally resumes this week after five months of inactivity and three individuals should have an extra spring in their step after ...
Sport
1 year ago

The stylish playmaker was the key man for his side - scoring four goals and providing a couple of assists in that period.

With Chiefs to play Wits at Orlando Stadium tomorrow (6pm), Manyama expect a tough match having watched them lose 2-3 to Mamelodi Sundowns in the Nedbank Cup semifinal on Saturday.

"I think now they are even more difficult to play against and I think they are still motivated to play for the club. There is history to make for them," Manyama continued.

"Unfortunately, they couldn't make it in the Nedbank Cup. But Wits will always be Wits, very tough team to play against... it's going to be a tough game but we are looking forward to it. We have our own plans and we will try to capitalise on their weakness but it is going to be a hell of a game that I can promise you."