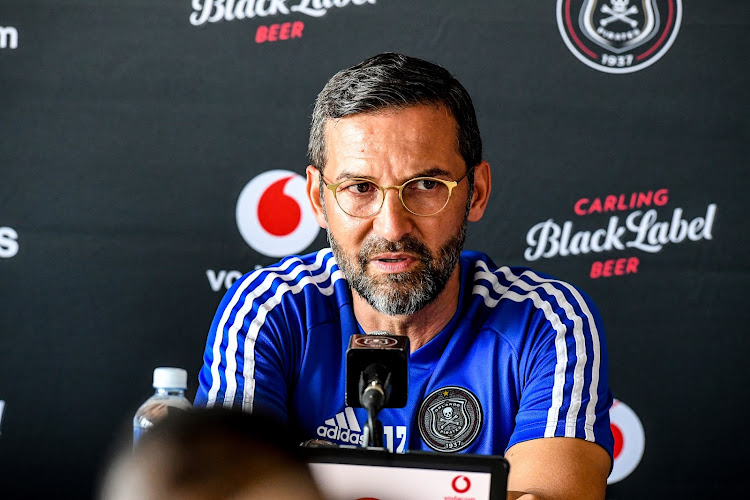 Orlando Pirates coach Josef Zinnbauer has attempted to deflect the spotlight away from his team and said the pressure to win will be more felt by defending champions Mamelodi Sundowns ahead of a mouth-watering clash between the two sides on Tuesday.

Sundowns will play host to Pirates at Dobsonville Stadium as the Absa Premiership roars back to life with this blockbuster fixture following a five-month disruption due to Covid-19.

Victory for Sundowns will see the defending champions cut the gap between themselves and leaders Kaizer Chiefs to just one point with a game in hand while a defeat will derail their assault for a consecutive league title.

“We have not a big pressure. Sundowns have to fight for the title and need the points more than us‚” said German mentor Zinnbauer ahead of the 6pm kickoff match.

Sundowns are within touching distance of the top spot and they have no room for error with matches to come thick and fast in empty stadiums as part of efforts to contain the spread of the coronavirus pandemic.

Zinnbauer watched as Sundowns booked their place in the Nedbank Cup with a hard-fought last-gasp victory over Bidvest Wits at the weekend and expects his counterpart Pitso Mosimane to ring the changes but still put out a competitive matchday squad.

“We watched the game and we have the information‚ we have analysed the squad. Pitso is a good coach‚ one of the best in this country. For us it is important we do what we do.

“We have prepared the team well and we will do our best to win points‚” said Zinnbauer speaking to the media on Monday via video.

“But Sundowns have so big squad with a lot of players and my feeling was Pitso will change and will give players like [Andile] Jali and [Tebogo] Langerman and other players‚ and maybe he saved the energy for us.

“I think Pitso [has] the system to change the players and I think we will get a completely [new] squad [on Tuesday].”

The Buccaneers have a chance to register a rare double over the Brazilians after running out 1-0 winners in the corresponding fixture earlier this year.

Pirates are still in with a slight chance to smash and grab the Premiership title starting with victory over Sundowns‚ but Zinnbauer tried to play down the expectations.

He said he is more focussed on preparing his squad for a title assault next season.

“As a coach and as a team you want always and always the best. It is normal. As I said earlier I come there to join Pirates in 11 or 12 place in the table and now we grow up and we have a good position now.

“For me it is important that we prepare the team for next season. But we will fight for all points.”