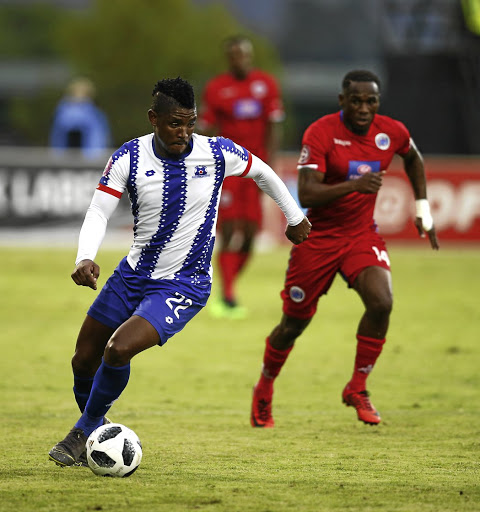 Mohau Mokate in action for Maritzburg United before he was off-loaded. / Steve Haag/Gallo Images

After surprisingly leaving Maritzburg United in August last year, having had helped them retain their top-flight berth in the playoffs three months earlier, gifted striker Mohau Mokate, 29, insists he has unfinished business in the Premiership.

Now in the books of GladAfrica Championship side Ajax Cape Town, Mokate can't wait to return to the elite league next season. Mokate's dream of top flight football looks achievable as the Urban Warriors are in pole position.

Before coronavirus outbreak forced football to stop in March, Ajax were at the summit of the second-tier table on 48 points, with six games to spare. Mokate has featured in two league games for Ajax and has not scored so far.

"I just want to play in the Premiership again. I really feel like I didn't reach my targets there, so I want to finish what I started in the PSL.

"It's not just my individual dream, it's our goal as the team. We're all working on making sure that Ajax gain promotion," Mokate told Sowetan.

Last season in the playoffs, Mokate netted two goals to help the Team of Choice overcome second-tier sides in Tshakhuma Tsha Madzivhandila and Royal Eagles in the round-robin contest.

The marksman from Rustenburg, North West, doesn't hide that he was caught by surprise by Maritzburg's decision to ship him out on the back of a solid individual campaign.

"To be quite honest, I was surprised. It came as a real shock," said Mokate, who apart from the two playoffs goals, had scored four in the league.

"Maritzburg made me who I am today. I am happy they gave me a chance [by signing him from Orbit College in 2014]."

What were the Team of Choice's reasons to release one of their leading centre-forwards at the time?

"I spoke to the coach [Eric Tinkler]. He told me I must go and explore other opportunities out there and I accepted it."

Mamelodi Sundowns are picking up "lots of injuries" as the Premier Soccer League (PSL) scrambles towards an uncertain kickoff date for a return to ...
Sport
1 year ago

Stellenbosch FC coach Steve Barker says while his team cannot expect to be 100 percent ready for a still uncertain kickoff date of a return of the ...
Sport
1 year ago
Next Article