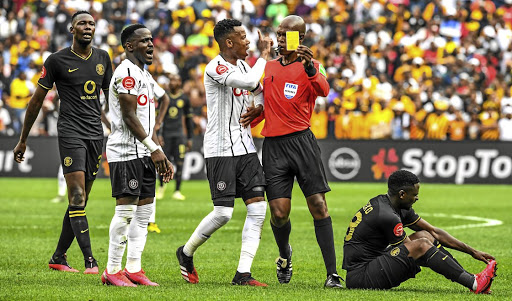 Happy Jele of Orlando Pirates challenges referee Luxolo Badi during the Soweto Derby in February. Some refs say they haven't been paid since March when football was halted.
Image: Sydney Seshibedi/Gallo Images

The spat between match officials and the SA Football Association (Safa) appears to be growing as referees now accuse the association of not helping them access funds from the government's solidarity fund.

Some refs have earned a paltry R3,600 since the national lockdown in March, while others have not had any income at all.

The cash-strapped referees told Sowetan that since they applied for the relief fund a few months ago, they are yet to receive any feedback from Safa.

Only 55 elite referees who are officiating in Absa Premiership matches have been receiving stipends from the PSL which amount to R3,600 a month after tax.

But those who are working in the GladAfrica Championship and don't have employment are not getting anything and are still waiting for the relief fund.

"Only referees who are working in Absa Premiership matches have been getting stipend of R3,600; for some of us who are not working, it has been difficult," a referee who asked to remain anonymous for fear of victimisation said.

Irvin Khoza tells why the league should resume

The PSL's apparent desire to resume play as soon as possible is in line with trying to save jobs across top-flight football.
Sport
1 year ago

"We've since applied for the relief fund and we've not received anything and no one is saying anything, whether we met the criteria or not."

Another referee said the relief fund was made available for all referees after they lost an income when PSL matches were suspended in mid-March.

"We lost income because of Covid-19, so everyone is entitled to apply through the federation which we've done; there is still no feedback," he said.

Banyana Banyana players and other athletes from different sporting codes received their funds in May after they applied.

Safa acting CEO Tebogo Motlanthe said he was not in a position to say which referees got the money or not and asked Sowetan to call Hluyo, who failed to respond to our texts and calls.

"We've helped them to apply for what the government was offering and we must also not forget that we don't have full-time referees at this time," Motlanthe responded.

"Those who are not working, we've assisted them to get what the minister has put to the sports fraternity. So, there is no money which came from either Fifa or CAF to say it is a relief for referees.

"I don't have the right figures at the moment regarding who was paid and who was not."

Athletes who have successfully applied for the R150m relief fund made available by the government last month must receive their monies in this ...
Sport
2 years ago
Next Article