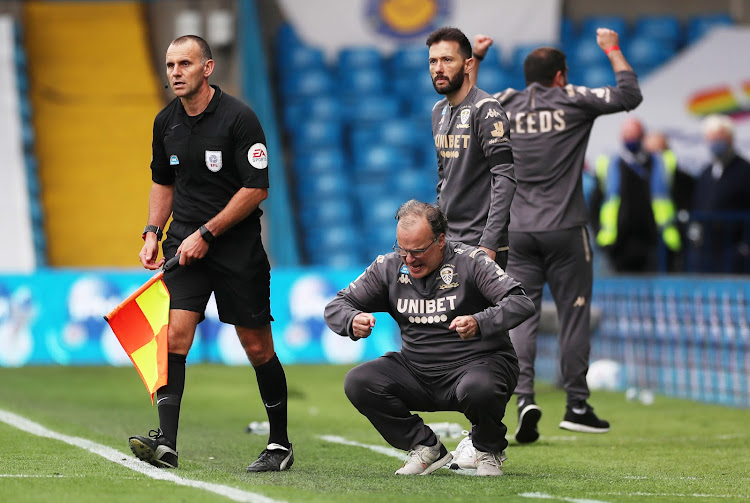 Leeds United manager Marcelo Bielsa is in for the long haul, according to the club's chief executive.
Image: Action Images/Lee Smith

Leeds United have only reached 'base camp' after securing promotion to the Premier League and their vision is to return to the Uefa Champions League in the coming seasons, chief executive Angus Kinnear has said.

Leeds were promoted to the Premier League on Friday after second-placed West Bromwich Albion's loss at Huddersfield Town before being confirmed as champions with Brentford's defeat by Stoke City on Saturday.

Leeds played European football for five consecutive seasons between 1998 and 2003 and reached the semi-finals of the Champions League in 2001.

Kinnear, who was appointed in 2017, believes the club must strive to hit those heights once again.

"Whilst we're celebrating, whilst we're all very excited, we've got back to where we belong. This really is base camp for Leeds," Kinnear said.

"Now it's going to be really about building on that and making sure that over the next few years we start to compete at the level Leeds should be competing in, which ultimately is the top six.

Three-times English champions Leeds were relegated from the Premier League in 2004 and struggled to compete for promotion until the arrival of Marcelo Bielsa in 2018.

Bielsa's contract is due to expire at the end of the season but Kinnear believes the former Argentina coach is in for the long haul.

"He has a review, he knows the direction he wants to take the club in," the Leeds chief said.

"The challenge with Marcelo is his intentions are always a bit of a mystery...think he's fallen in love with the club. I think he's committed to it."

Striker Patrick Bamford said the club's achievement had not fully sunk in as yet, while captain Liam Cooper hailed his team mates for exemplary performances throughout the season.

"People have said we're going to go down in history for what we've done, but last night was probably only a small part of the celebration," Bamford said.

"I'm absolutely delighted, this club has been in the doldrums for 16 years and to be part of the club and this group of players in honestly unbelievable," Cooper said.