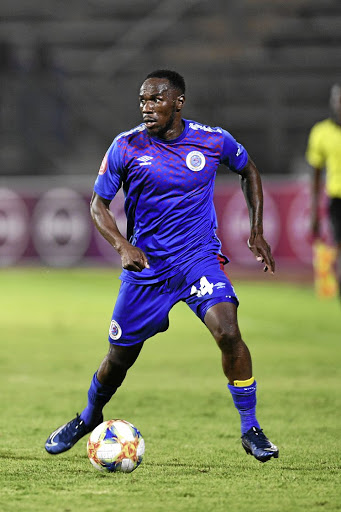 When SuperSport United left-back Onismor Bhasera returned to the Premier Soccer League (PSL) to join Bidvest Wits in 2013, having left the country in 2010, many wrote him off, feeling he was past his prime.

Before leaving Kaizer Chiefs for English league two side Plymouth in 2010, Bhasera, 34, had a fruitful quarter dozens of years at Naturena, helping Amakhosi win the 2007 Telkom Knockout.

After three years of regular football with Plymouth, where he registered more than 100 appearances, Bhasera didn't show any signs of slowing down as he made the left-back position at Wits his own until, he joined SuperSport in 2016.

During his three-year stint at Wits, Bhasera amassed 64 games across all competitions, while at Matsatsantsa he's played 101 to date.

The Zimbabwean-born defender has chalked up his longevity and consistency to living a principled life, where nutrition and exercising take precedence.

"I have always made sure I stay away from dirty lifestyle. Things like alcohol, nightclubs and smoking are dangerous and I have always avoided them," Bhasera told Sowetan.

"I have always taken care of my body. I am mindful of what I eat. I always eat healthy. My body is the one that puts food on the table for me, so it's important that I respect it in return, by staying fit."

The veteran full-back is also kept going by his desire to be an astute role model to upcoming players.

"There's a lot of youngsters coming through the system. Some of them look up to us as seniors, so you don't just want to be a senior player, but you must be one who leads by example," said Bhasera.

Bhasera hasn't thought about the day he'll hang up his boots.

The Matsatsantsa man still harbours a dream of winning the league.

Modiba on tough conversations with Mokoena and Mbule: 'No one is allowed to take it personal'

The pitfalls of fame have often prove to be the undoing of many promising footballers and SuperSport United midfielder Aubrey Modiba is determined to ...
Sport
11 months ago