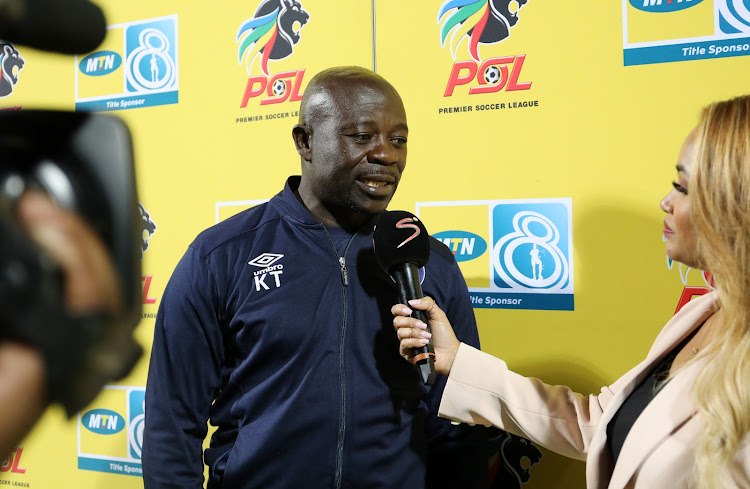 Kaitano Tembo will be gunning for the MTN8 title after losing in the final in 2018.
Image: Muzi Ntombela/BackpagePix

SuperSport United coach Kaitano Tembo had every right to gloat after he knocked Mamelodi Sundowns out of the MTN8 at the semifinal stage on Wednesday.

But he decided to be humble after he guided Matsatantsa a Pitori to the October 5 cup final of the competition against Highlands Park‚ and gave respect to Sundowns coach Pitso Mosimane as the man who he has a lot of respect for.

“I have a long history with coach Pitso‚ he is someone I respect and know very well personally and as a coach‚” he said.

“He is someone who is very passionate about the game and has an admirable work ethic. It is pleasing to have been able to beat Sundowns‚ especially when you consider that they have been dominating us for the past years.”

The former Zimbabwean international‚ who was Mosimane’s captain as a player at SuperSport United some years back‚ went on to say that he is still learning as a coach with only two years' experience.

“I am just two years as a head coach and I haven’t won anything. Like I said earlier‚ I am pleased to have beaten my mentor but it doesn’t mean anything to me.

“It probably means a lot to the club because we are trying to turn things around and be competitive against Sundowns. Local derbies are always tricky but we managed to win the match and is good for the club.”

Looking back at the win‚ Tembo admitted that it was not easy against the former Caf Champions League champions‚ but said SuperSport got their tactics spot on.

“It was a difficult game‚ we played against a very good team and I am proud of the guys‚” he said.

“Sundowns have quick attacking players like Ali Meza‚ Gaston Sirino and Thapelo Morena‚ so we needed to deal with their pace. Our central defenders‚ Bongani Khumalo and Clayton Daniels‚ did very well and also our fullbacks Onismor Bhasera and Siyabonga Nhlapo were good.

“When Sundowns played the short-passing game in front of us‚ they did not threaten us that much and we managed to frustrate them. Tebogo Langerman and Hlompho Kekana are dangerous playing those balls behind.”

Now that United are in their third successive MTN8 final‚ Tembo has shifted his attention to the bread and butter issues of the Absa Premiership‚ with a trip to Polokwane City at Peter Mokaba Stadium on Saturday.

Three points over second-placed City will keep United among the pacesetters but he is fully aware that their task is not going to be easy as the Limpopo team have only conceded one goal after five starts.