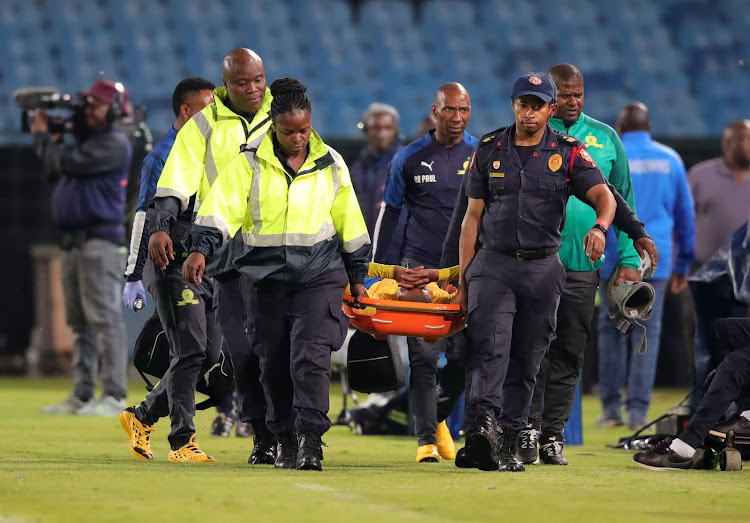 Thapelo Morena of Mamelodi Sundowns leaving the field after being injured during the 2020 Nedbank Cup match between Mamelodi Sundowns and Supersport United at Loftus Versfeld Stadium, Pretoria on 08 February 2020.
Image: Samuel Shivambu/BackpagePix

Mamelodi Sundowns have confirmed that Bafana Bafana defender Thapelo Morena will go under the knife on Sunday.

Morena suffered fracture and ligament damage on his right ankle in the 1-0 win over SuperSport United at Loftus on Saturday night as Sundowns progressed to the last 16 of the Nedbank Cup.

He was stretched off the field in the 69th minute when he twisted his ankle in a duel with United defender Onismor Bhasera and it appears that his season may be over.

“It is a difficult one with Thapelo because we need him for the Champions League‚ the domestic league and this tournament going forward and we have lost him now‚” said Sundowns coach Pitso  Mosimane.

“He went to the hospital and I think the ankle went out of the joint and then  went back in‚ we can say it is a positive but it is difficult. It is part of the game because football is a professional sport‚ it is that thing of trying to be too ambitious and trying to win every game.

“This is what I was saying that maybe we should do a Jurgen (Klopp) and focus on the league and the Champions League but we don’t have that culture here and this is what happens.”

“He is an important player for Sundowns and for Bafana Bafana‚ I just want to wish him a quick recovery‚" he said.

"He is a good boy‚ we want to see him on the field and it was just unfortunate for him to get injured the way he did. I had an opportunity to see the incident again and I think he twisted his ankle when he got stuck in grass.

"It wasn’t really because of the tackle by Onismor Bhasera and I hope he recovers quickly.”

“They must come and fill his place‚ this is what happens when you play a lot of games.

"This is what the Nedbank Cup will give you‚ that is why sometimes I say the teams that are bottom five or six must let this thing go because it will spill you out in the semifinals.

“This tournament drags you and drags you because you think you are going to get it and it spills you out in the semis when you are thinking that we are about to win it.

"By the time you look back‚ you have been putting a lot of games on your mileage and you lose players like Thapelo. I wish I could do like Klopp and play youngsters but we don’t have that culture in SA.”