Pitso Mosimane unsure of his starting line-up against Al Ahly 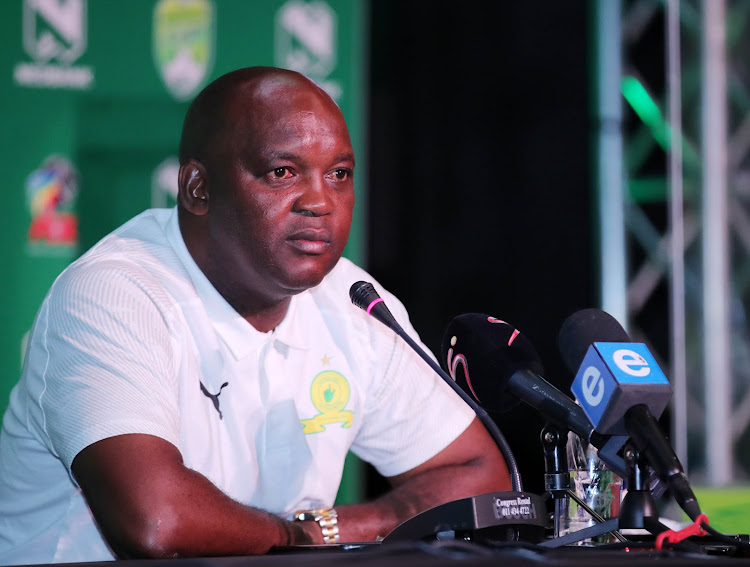 Pitso Mosimane is hoping his team's speed will help unsettle their hosts.

Mamelodi Sundowns leave on Monday night for Cairo with coach Pitso Mosimane unsure of his starting line-up‚ and wary of a formidable test that awaits‚ as they face Al Ahly in the quarterfinals of the Caf Champions League.

He will have to wait through the week before being able to settle on his back four for Saturday’s first leg tie at the Cairo International Stadium as several players face late fitness tests.

But Mosimane has revealed some of his approach‚ saying he will rely heavily on his wingbacks with the emphasis on containment rather than expansion.

The back five positions are still all up for grabs as the team were due to fly overnight‚ directly to the Egyptian capital.

Goalkeeper Denis Onyango still “has that dodgy hamstring‚” according to Mosimane‚ which means Kennedy Mweene is also in the picture to play while centre-back Ricardo Nascimento has a slight groin strain.

“It’s not that serious but we are being careful about that‚” added the coach.

Mosa Lebusa got a bad bump near the end of the midweek win over Bloemfontein Celtic and suffered a bruised hip but is likely to play left-back as Tebogo Langerman is still working his way back from injury.

Motjeka Madisha is likely be the right-back after Thapelo Morena’s injury and the suspension of Anele Ngcongca.

“It’s not going to be Nico (Nicholus Lukhubeni)‚ he’s still too young. He gave away the penalty (against VUT in the Nedbank Cup on Sunday). It was a bit naïve‚” said the coach.

Wayne Arendse is likely to be the other centre-back‚ adding much needed height for the aerial contests.

“We will need to be organised and they will look to push us into our own half of the field‚ but hopefully we can use our speed behind them.

“We need to absorb the pressure‚ we need to be mentally strong and we need to be well organised. It’s a game where the tactics and the mind will be key‚” Mosimane added.

Hungry Lions coach Henry Basie says his side are determined to defeat Baroka FC in their Nedbank Cup last-16 clash at Peter Mokaba Stadium on Sunday ...
Sport
2 years ago

Twenty-six years after the birth of Banyana Banyana, the women's national soccer team has finally come of age.
Sport
2 years ago

Sundowns might be recent African champions, but that has not stopped VUT coach Stanley Nkoane spitting fire on his team’s chances against the ...
Sport
2 years ago
Next Article