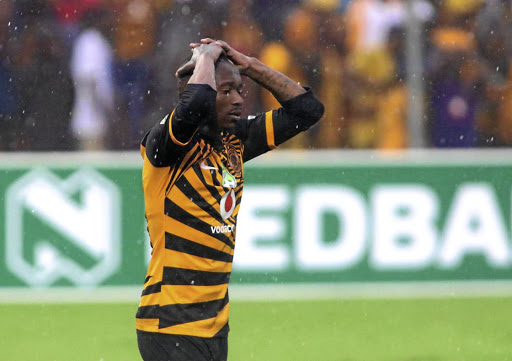 Khama Billiat in agony after missing from the spot.
Image: ANTONIO MUCHAVE

In a week where he could do more with some relaxation, Kaizer Chiefs coach Ernst Middendorp appears to feel the pressure after two negative results, in successive weeks.

After Chiefs were knocked out of the Nedbank Cup competition by Highlands Park at Makhulong Stadium on Saturday, Middendorp could not hide his frustration, bemoaning the state of the pitch.

Chiefs will head into Saturday's epic derby against Orlando Pirates after defeats to Maritzburg United in a league clash, and now Highlands Park. The Glamour Boys were booted out of the competition following a 5-4 penalty shoot-out defeat against the Lions of the North.

"Saturday is our next game, and we need to concentrate on it," Middendorp said when asked if his team would focus on winning the Absa Premiership title, the only trophy Amakhosi must fight for this season.

What makes it even more difficult for Middendorp, is that they lead the log by four slim points, with second-placed Mamelodi Sundowns breathing down their neck.

This means he can't afford a defeat against Pirates on Saturday.

Junior Khanye has said that this season’s long-time Absa Premiership leaders Kaizer Chiefs will not win the league title this season, and tipped ...
Sport
1 year ago

Middendorp blamed the poor pitch in Tembisa for his side's exit in the competition.

He claimed his side could not play their normal game, suggesting the match should have been stopped as the downpour continued.

"The conditions [were poor] to control and pass the ball, and to combine," complained Middendorp.

"It is difficult to keep high defence line when the opponent is taking long balls, and you start on your half again. It is difficult for a team that wants to pass and to prepare opportunities."

George Maluleka and Khama Billiat missed their spot kicks for Amakhosi, while Rodney Ramagalela failed to convert for the home side. Musa Nyatama scored the winning penalty in a sudden death to send the Lions of the North through to the next round.

"Normally the two who missed on our side, George and Khama, [convert) 100 percent every time at training," Middendorp said.