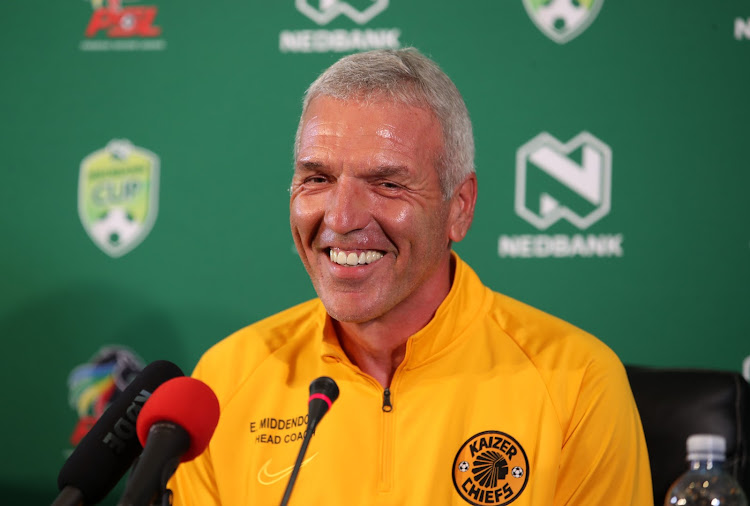 Middendorp‚ though‚ said he could give no guarantees that any of the three will play against the GladAfrica Championship team from Durban‚ emphasising that sometimes players have to “wait for their opportunity” at the right time.

The coach said‚ with Absa Premiership leaders Chiefs out of action since they beat Lamontville Golden Arrows 1-0 away on January 25‚ he will field the core of his first team to give them much-needed rhythm and game time.

Playmaker Billiat returned to training “eight days ago”‚ Middendorp said‚ after an extended period out where he was handed to the medical team and rested from too many matches‚ including on international duty for Zimbabwe.

He last played when he was substituted out of Chiefs’ 1-1 away league draw against Maritzburg United on December 22.

Bafana Bafana No 1 Khune made a brief and unsuccessful two-match return for Chiefs in September from the shoulder injury that kept him out of the Africa Cup of Nations in Egypt in June and July.

He has been kept on the bench by in-form Nigeria international Daniel Akpeyi since a return to fitness last month.

Akumu‚ signed from Zambia’s Zesco United last month‚ is yet to play and an outing against Eagles‚ the bottom team in the First Division‚ would seem an opportunity to hand the Kenyan midfielder a debut‚ probably off the bench.

Middendorp said he intends to have a near full-strength team out on Saturday.

“It will be the core of the players we have used in the PSL. We had no competitive game last week‚” the coach said.

“[But] we will not set up because everybody deserves [a game].

"If it is Itu‚ Khama‚ whoever – please‚ we have a respectable team and squad for selection and sometimes players must wait for their opportunity‚ and whenever it is right.”

Middendorp said that Chief had no injuries‚ with just a “small question mark” on defender Kgotso Moleko with a tight muscle.