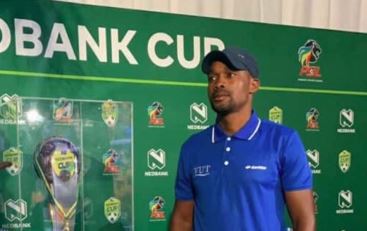 Fourth-tier Vaal University of Technology FC (VUT) might be from the lowest league among the sides left in the Nedbank Cup last-32‚ but that did not stop their coach Stanley Nkoane coming out with fighting talk ahead of his team’s meeting against Premier Soccer League Lamontville Golden Arrows.

An animated Nkoane said he believes VUT have every chance of beating Arrows at Dobsonville Stadium in Soweto on Saturday.

Asked‚ in a tongue in cheek question‚ about Arrows coach Steve Komphela’s renowned profligacy in the English language‚ Nkoane said: “English will not be playing football on the day.”

VUT’s coach was asked for his view on his opposition coach on Saturday‚ the former Kaizer Chiefs boss Komphela.

“He’s a good coach‚ an experienced coach‚ but a beatable coach‚” Nkoane said.

“I respect him as a coach. And coming up against him is a motivation to me. But‚ like I said‚ he’s a good coach‚ with a good team‚ but a beatable coach. Any team is beatable.”

Nkoane was asked about Komphela’s reputation for using big words in English‚ and what the VUT coach’s answer would be to that.

“I may not be in his class [in language]. But his English will not be playing football on the day‚” he responded.

“I can bola bola [speak] XiTsonga. If my team understand me‚ then he can speak to his team.

Nkoane repeated that his team from the fourth tier are a “closed book” to their PSL opponents‚ who are an “open book” to VUT.

New Zambia coach Milutin Sredojevic explained that he took the Chipolopolo job because of the challenge of getting the team back to the top of ...
Sport
2 years ago

Having scored just 14 goals from their 21 league games, it's evident Chippa United's struggles stem from their blunt attack.
Sport
2 years ago
Next Article