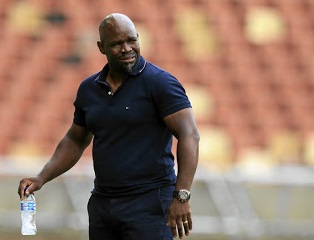 Lamontville Golden Arrows coach Steve Komphela is of the view that two more wins would keep them out of the relegation squabble, planning to start fighting to maintain their top-eight berth thereafter.

Arrows let what would have been their seventh league win of the season slip through their fingers when they surrendered the lead to eventually draw 1-1 against strugglers Polokwane City at the weekend.

The Durban club have garnered 24 points from 18 matches, occupying the eighth spot on the log.

"All that we were chasing [against Polokwane] was to make 26 [points] and then you get four, you are out of the mess [referring to relegation] and then you start working towards 40 for the top-eight. We are on 24, we still need two matches to win, then we are guaranteed safety," said Komphela.

'I thought Komphela would succeed': Kaizer Motaung speaks out about Chiefs' managers

In a wide-ranging interview to mark Kaizer Chiefs’ golden jubilee, club boss Kaizer Motaung reflected on some of the coaches the club has had over ...
Sport
2 years ago

Abafana Bes'thende had taken the lead via Knox Mutizwa, grabbing his ninth of the campaign, barely 10 minutes into the match, but Mohammed Anas struck 20 minutes before the final whistle to make it 1-all.

Mutizwa may be the club's top-scorer, but Komphela thinks the Zimbabwean international's conversion rate was below par, given the number of chances he has squandered.

"Knox could have been at 18 [goals], the number of chances we create, [the number of opportunities] he gets [is too much] and he doesn't convert. It's just a pity; he's better than nine goals he's currently sitting on."

Komphela is also not satisfied about the manner in which they fail to control the game after taking the lead.

Chiefs supremo reflects on the joys and pains of the 50-year journey of a club which grew from a garage to a phenomenon.
Sport
2 years ago

How Bloemfontein Celtic learnt to live within their means

Bloemfontein Celtic have learnt to live within their means and are trying to make the best of a difficult situation in the wake of the financial woes ...
Sport
2 years ago