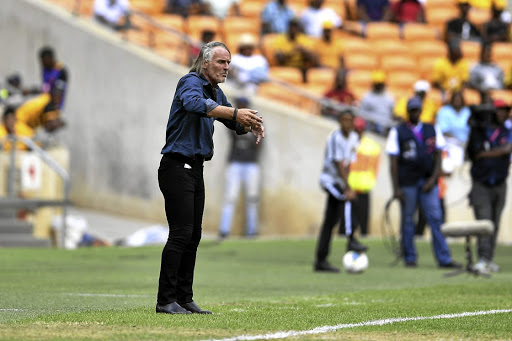 Having just won one of the eight games he's been in charge of, with four defeats and three draws, pressure is certainly mounting on Cape Town City coach Jan Riekerink.

However the Dutchman, who replaced Benni McCarthy in November, strongly believes he can still turn things around at the Citizens.

Riekerink suffered his fourth defeat at the helm of City at the hands of log leaders Kaizer Chiefs at the weekend, where the Soweto club claimed a 3-0 win.

"The players are showing signs of understanding what I am bringing in and I am very confident things will change," said Riekerink in the wake of their loss at Chiefs, where Leonardo Castro, Samir Nurkovic and Mulomowandau Mathoho were on target.

"This is our first loss this year and we have one win, one draw.

"The AmaZulu game [that they drew 2-2 last week Wednesday], we deserved to win, we didn't and now we have two home games and one away before the end of January, we'll see where we are, but I have the trust of my team."

While bemoaning their bluntness in front of goal, Riekerink also indirectly attributed their struggles against Chiefs to the absence of his skipper and midfield workhorse in Thamsanqa Mkhize and Roland Putsche respectively, coupled with Thato Mokeke sustaining an injury in the 11th hour at training.

"We have two suspended players. Thami and Roland. The last day of training before the game Thato also dropped out of training due to an injury, so we had to recover those positions," said the City mentor.

"We looked fresh and if we had used our opportunities it would have been a different story. We created some amazing opportunities to score, but it is about the number of goals you have at the end of the day."