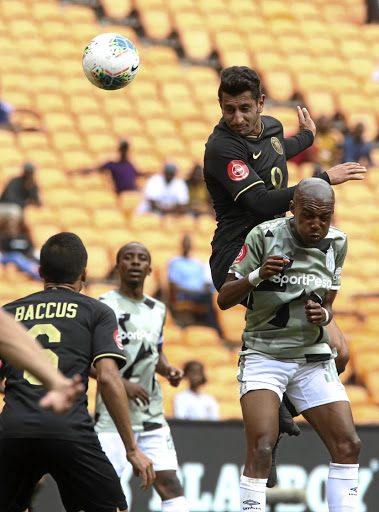 Keeping a clean sheet and scoring three goals for the second game in the trot, Kaizer Chiefs showed serious intent to win the Absa Premiership after putting in a perfect display to thump Cape Town City 3-0 here yesterday.

It took goals from Leonardo Castro, Samir Nurkovic and Eric Mathoho for Amakhosi to claim the win, extending their lead at the summit of the log to nine points.

Yesterday's win came just three days after drubbing Highlands Park in a similar fashion at the same venue. Chiefs have now amassed 41 points, two more than they did in the allotted 30 matches last season.

The very first opportunity of the match fell to Castro in the third minute, but the in-form Colombian marksman unleashed a poor shot that was easily stopped by City goalkeeper Peter Leeuwenburgh.

However, it wasn't long before Castro redeemed himself, breaking the deadlock with a neat header from Kearyn Baccus's cross in the 11th minute.

As both teams packed the midfield with three midfielders each, the midfield was where things were happening, especially for Amakhosi, with George Maluleka, Baccus and Willard Katsande getting the better of Mduduzi Mdantsane, Thabo Nodada and Zukile Kewuti.

Kaizer Chiefs caught the imagination of the football public because they would sweep up the best players everywhere they played‚ and actively ...
Sport
1 year ago

Chiefs' superiority enabled them to create a number of opportunities and they should have at least scored two more goals before the break. It was Nurkovic's indecisiveness that let the hosts down in the thick of their dominance.

Having missed the last game against Highlands, through suspension, Nurkovic looked a bit rusty at times, misdirecting passes.

The Mother City club stepped up a gear towards the end of the first period, utilising the left flank through Bradley Ralani.

Later in the first half, Daniel Akpeyi appeared to have injured himself while making a save, prompting Itumeleng Khune to warm up. The crowd cheered for Khune to come on, but the Nigerian soldiered on after receiving treatment.

Kaizer Chiefs striker Samir Nurkovic has described his partner Leonardo Castro as a great player after the latter scored a brace in Chiefs’ 3-0 ...
Sport
1 year ago

With Castro substituted for Dumisani Zuma at half-time, Nurkovic assumed more responsibility up front and the Serb looked the part, netting Amakhosi's second of the match, his ninth in the league this season, five minutes post the hour mark.

Powered by the vibrant crowd of approximately 20 000 spectators, Chiefs turned up the heat on City as Mathoho headed in the third goal.