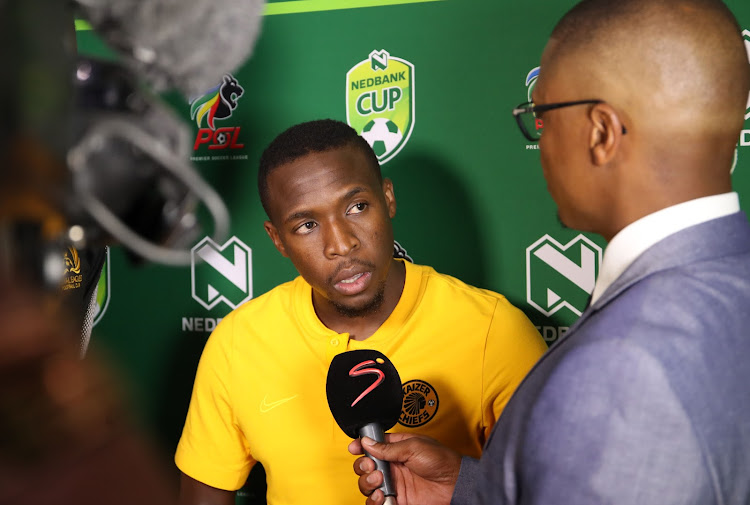 George Maluleka of Kaizer Chiefs during the 2020 Nedbank Cup Launch at the Nedbank HQ, Johannesburg on the 09 January 2020.
Image: ©Muzi Ntombela/BackpagePix

Kaizer Chiefs know that it is a case of “us against the PSL”‚ midfielder George Maluleka has said of Amakhosi’s Absa Premiership title chase.

Maluleka said Chiefs are aware that many see their 16 games‚ 12 wins and two dates‚ as “a fluke” from a squad punching above their weight‚ who many expect to falter at some stage.

“Every time we stumble we’ve always managed to bounce back even stronger. That’s what has kept us going‚” Maluleka said of a small hiccup of an away draw against Maritzburg United and defeat against SuperSport United on either side of Christmas.

“We had that little stumble. But we always make sure we look at the bigger picture.

“Obviously we don’t look at what is happening in the end‚ but take it one game at a time. I think that’s very important – instead of getting way ahead of ourselves.

“For us‚ it’s very good. A lot of people try to put us under a lot of pressure.

“But I think we’ve actually taken it very well. We always say it’s Kaizer Chiefs versus the whole PSL with every game we play.

“But we’re playing very well. We haven’t changed anything. We’re not panicking.

“And it’s because we’re focused on that particular game that we have that’s in front of us.

“We just want to make sure we don’t put too much pressure on ourselves. And we know what we’re capable of.

“We know that with each win we get we are one step closer.”

Chiefs have a strong record against City‚ having beaten them in five of their last seven meetings‚ plus another win on penalties‚ and lost just once.

Amakhosi would appreciate a win on Sunday.

It is not just a two-horse race between Chiefs and Sundowns – SuperSport and Bidvest Wits also have title credentials. But in the race between the two‚ Sundowns might have the distraction tough schedule added by the Caf Champions League‚ but they also have immense recent trophy-winning experience.

Chiefs have some pressure from four seasons without a trophy‚ and this being their 50th anniversary season‚ and of course far less trophy experience. So a buffer of seven to 10 points going into their last 10 games would significantly boost their championship hopes.

“Ja definitely. But we know that there are games coming up‚” Maluleka said.

“And keep in mind that these other teams fighting for the league still have to play each other. So a lot of points will be dropped.

“But our main focus is just on our own lane. One game at a time‚ one step at a time.”